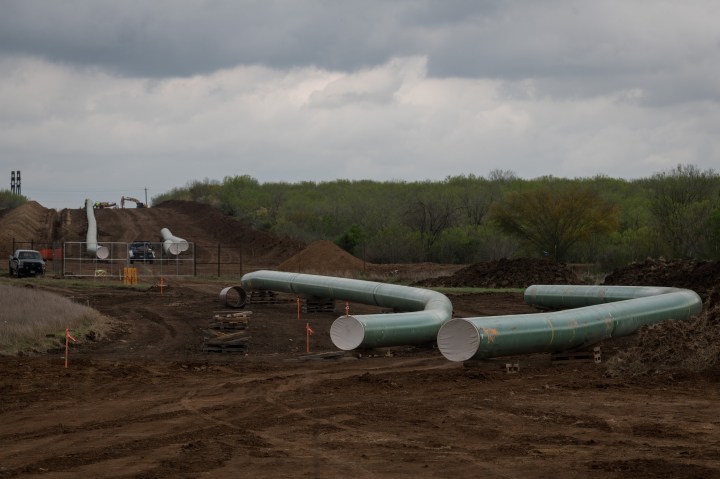 U.S. oil prices fall below zero for the first time

A view of pipeline construction, taking place outside Cotulla, Texas back in 2019, for the future transport of crude oil. LOREN ELLIOTT/AFP via Getty Images
COVID-19

U.S. oil prices fall below zero for the first time

A view of pipeline construction, taking place outside Cotulla, Texas back in 2019, for the future transport of crude oil. LOREN ELLIOTT/AFP via Getty Images

The price of U.S. crude oil has fallen into negative territory for the first time ever.

On Monday, a barrel of West Texas Intermediate crude oil (the standard oil produced in the U.S.) dropped to negative $37.63. In other words, if you wanted a barrel of oil right now, someone would have to pay you — not the other way around.

Traders holding that contract have to accept the oil they purchased, but storage capacity is extremely limited right now because of a decline in demand.

“You can usually make money by storing crude and selling it at a higher price on the futures market,” Amelie Carlton, an economics lecturer at Rice University, told Marketplace. “But future traders … don’t want to take delivery of barrels of oil. So what they’re doing is they’re trying to get rid of the physical delivery and selling out of those May positions, which is creating a negative price.”

The decline marks a stark contrast with prices at the beginning of the year, when a barrel of WTI oil cost more than $60. The plunge in demand has also pushed down the average gas price in the U.S. to $1.81 a gallon ($1 cheaper than a year ago), according to AAA.

Stocks declined in reaction to the news, with the Dow Jones Industrial Average dropping more than 592 points.