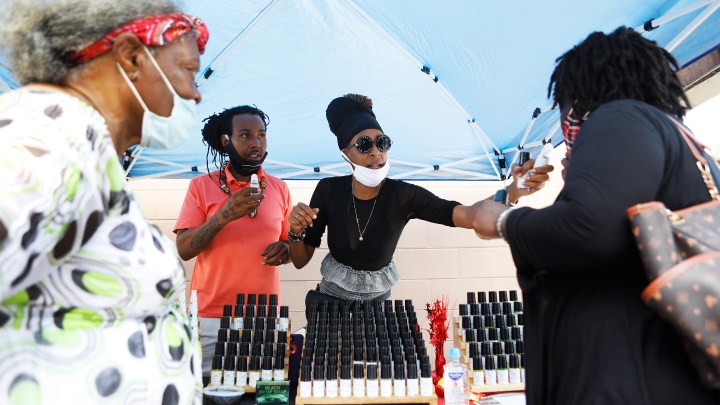 COPY
A beauty product booth at a Black-owned business expo in Florida. The number of Black business owners in the U.S. fell more than 40% between February and April, according to a New York Fed study. Octavio Jones/Getty Images
COVID-19

A beauty product booth at a Black-owned business expo in Florida. The number of Black business owners in the U.S. fell more than 40% between February and April, according to a New York Fed study. Octavio Jones/Getty Images
Listen Now

For the last several months, we’ve been watching the COVID-19 pandemic hit Black-owned businesses particularly hard. A new report from the New York Federal Reserve confirms it — and looks into the reasons why. A lot of it comes down to relationships with banks.

Getting that first round of Paycheck Protection Program funding was like running a race. And Vera Daniels was miles away from the starting line when the gun went off.

“I sent emails out to a listing of about 100 banks,” she said. “It just felt helpless.”

Daniels owns Wellness Tea Therapy, a teahouse and wellness center in Brooklyn, New York. She banks with a credit union, but it couldn’t help her apply for a loan. So she had to find a bank that would. But “the banks suggested that their primary concern would be their customers,” Daniels said.

She still hasn’t found funding. She’s pivoted to online sales and said she’s hanging in there. But a lot of other Black entrepreneurs can’t say the same. The number of Black business owners in the United States fell more than 40% between February and April, according to the New York Fed study. That’s more than double the decline of white business owners.

“We saw that there were real differences going into the crisis between Black- and white-owned businesses,” said Claire Kramer Mills, who co-authored the study.

She said a lot of this had to do with access to capital. Traditionally, Black businesses have had to look to friends or family, to 401(k)s, to short-term and often predatory lenders — and not to banks.

“These places have had a double whammy,” Kramer Mills said.

“It’s just like really worsening an already bad situation in the Black community,” said Belinda Archibong, professor of economics at Barnard College. She said Black health and Black wealth are intertwined. And the only way to change the outlook for Black-owned businesses where COVID-19 has hit hard is to directly allocate funds to them.

“And that’s something that needs to happen with federal regulation,” Archibong said, like a targeted federal loan program.

That’s important now that it’s clear this COVID-19 crisis is a marathon, not a sprint.