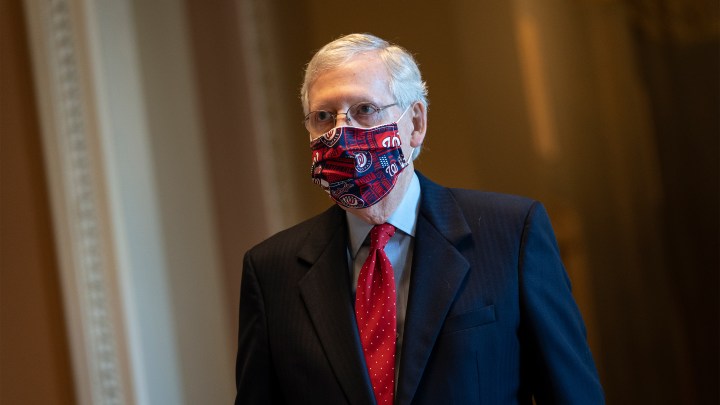 COPY
Some Senate Republicans have argued that the $600 benefit is too much, discouraging people from returning to work. Above, Senate Majority Leader Mitch McConnell walks to the Senate floor on Thursday. Drew Angerer/Getty Images
COVID & Unemployment

Some Senate Republicans have argued that the $600 benefit is too much, discouraging people from returning to work. Above, Senate Majority Leader Mitch McConnell walks to the Senate floor on Thursday. Drew Angerer/Getty Images
Listen Now

A study by Yale economists finds that expanded jobless benefits that Congress put in place back in March in response to COVID-19 did not reduce employment. This comes as Congress is debating the right level of relief for unemployed Americans as the $600 weekly supplement comes to an end.

Six months ago, Duke Ducheneaux had plenty of work as a live music audio engineer. He lives in Denver but spent a lot of time touring the country with bands, until all that stopped in March.

“I hate sitting here and doing nothing,” he said. “All I want to do is work.”

He’s on unemployment and said this is the last week he expects to get that $600 that’s part of the CARES Act. He said all told, that’s about half what he would normally be making.

Some Senate Republicans and the White House have argued that the $600 benefit is too much and that it discourages people from coming back to work. Dana Scott, the lead author on the Yale study, said the research tells a different story.

“There are a lot of reasons that people are not going back to work that are more important in determining overall employment levels than these disincentive effects,” Scott said.

Those reasons include child care and the risk of getting COVID-19. She said another issue is the labor market: If there aren’t enough jobs to be had, people can’t go back to work.