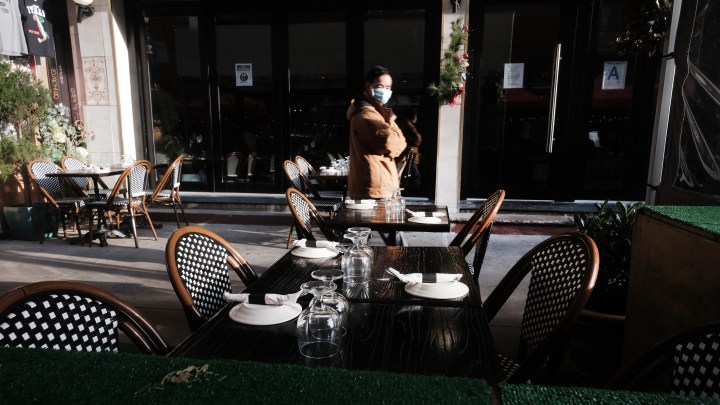 Empty tables stand outside of a restaurant in Manhattan on Dec. 11, 2020, in New York City. Spencer Platt/Getty Images
Listen Now

The $900 billion coronavirus relief bill that Congress just passed is one of the largest stimulus packages in U.S. history, the largest being the original $2.2 trillion CARES Act passed in March.

The passage of this latest relief took a long time, and a lot of the new help, which includes another 11 weeks of unemployment benefits, doesn’t last much further than early April. That’s a big part of the reason this bill may not go far enough.

And don’t get Curt Spaulding started on government aid. Those one-time $600 stimulus checks?

“What is $600 really gonna do for an individual at this point? Nothing,” he said. “It’s a drop in the bucket for closing our economy down for half a year or more.”

Spaulding co-owns Catmando’s bar and grill in Michigan’s Upper Peninsula. He is going to apply for the next round of Paycheck Protection Program money, but he says there wasn’t enough last time.

“We are losing over $100,000 in revenues — well over that,” Spaulding said. “What do you think that does to me, my family, and more importantly my employees, who are out there struggling right now, not paying their bills, some of them trying to get food stamps?”

But the $900 billion does include a lot: special access to food stamps extended for six months, $300 weekly in extra federal unemployment benefits through March, Pandemic Unemployment Assistance funded into April. All with coronavirus vaccines rolling out.

“This is a lot of firepower, and it would not surprise me if this is all that’s gonna end up being needed,” said Michael Strain, who is with the American Enterprise Institute. “We could have an unemployment rate in the 5-6% range by the summer.”

But if history is any guide, unemployment rates will be higher than that among lower-income and minority workers.

“There are some businesses that closed that may never reopen. There are some jobs that are never going to come back,” said Ashley Harrington, with the Center for Responsible Lending. “So it doesn’t mean that when we do officially get the virus under control, the damage won’t still be there.”

President-elect Joe Biden has promised more relief once he’s in office. But timing, where Congress is concerned, is unpredictable. Diane Schanzenbach, director of the Institute for Policy Research at Northwestern University, said the most recent delays have been costly.

“What we’ve seen, of course, in the last couple weeks is increasingly desperate situations, especially for low-income families,” she said.

And if that desperation means another stimulus is needed as soon as this one ends, well, human desperation didn’t really get Congress to move quickly the last time around.