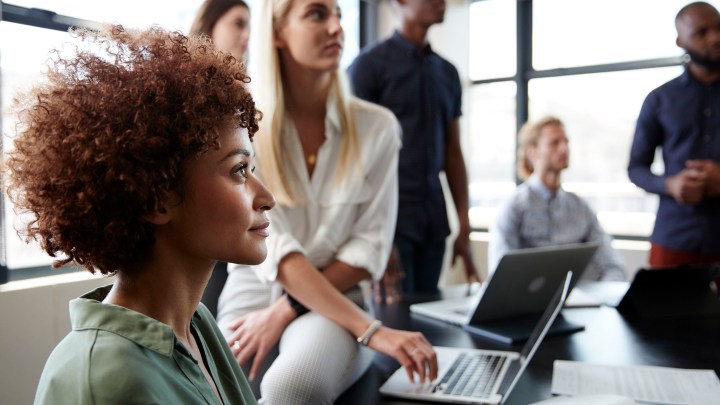 COPY
"We have an understanding of systemic racism and policing, political alienation and economic precarity that exists among millennials and Gen-Zers," Cathy Cohen said. Getty Images
Race and Economy

"We have an understanding of systemic racism and policing, political alienation and economic precarity that exists among millennials and Gen-Zers," Cathy Cohen said. Getty Images
Listen Now

The GenForward scientific survey of millennials is designed to capture how race and ethnicity shape the experiences and perceptions of that generation. It makes sure that younger people of color are properly sampled.

How does the survey’s four years of data inform the current social justice movement that’s gathered widespread steam in the wake of the police killing of George Floyd in Minneapolis?

The survey’s founder, Cathy Cohen, a political science professor at the University of Chicago, shared that analysis with “Marketplace Morning Report” host David Brancaccio. The following is an edited transcript of their conversation.

David Brancaccio: What does your data tell us about this moment? Because it is a moment.

Cathy Cohen: Well, I think of it as both a moment and something that has been building for a while. And I think that’s part of what the data tells us. So, for example, we think of it as kind of having four components. One is just a very deep level of political alienation among millennials and Gen-Zers across race, and we’ve seen that consistently in our data, when young people kind of evaluate it — Congress and the presidency and political parties [poll] extremely low. We remember, in fact, that these same young people believe that leaders and government don’t care about them. So we’ve seen a level of political alienation. We’ve also seen in the data, the systemic racism believed to exist in the police. So when we ask a question like, “Do the police treat Blacks worse than they treat whites?” majorities of young people, independent of race, say yes to that question. So, this is an understanding that young people have had for a very long time.

Brancaccio: Professor Cohen, I heard you say independent of race, people of all races perceive a problem with police acting differently toward people of color.

Cathy Cohen: Yes. And it’s not just race. When we ask about the legal system — “Does the legal system treat people unfairly?” — majorities of young people, again, independent of race, say “yes” to that question. There is a kind of knowledge out there that maybe other people weren’t aware of, but at least existed among young people, that there was systemic racism, systemic discrimination, systemic inequality in policing and something we call the criminal justice system.

Brancaccio: And none of these discussions about social justice is far removed from economic justice, some people call it, [which is] about institutional racism as it expresses itself in terms of the economy and income inequality.

Cohen: That’s exactly right. So again, when we ask a question, for example, about feelings of precarity, economic precarity: “Will you be able to handle an emergency of $1,000?” We know that young people of color are more likely to express worry about those issues. But I would also say that I think there’s a sense among all young people of living with economic precarity. For example, we tell a story about young people loving the gig economy. When we ask the question, “Would you rather have a long career or be a part of the gig economy?” overwhelmingly young people say they’d rather have a long career. So, again, I think we have systemic racism. We have an understanding of systemic racism and policing, political alienation and economic precarity that exists among millennials and Gen-Zers.

Brancaccio: There was a question that you asked, I think it was last year, that especially informs what we’re seeing.

Cohen: We asked the question, “What would be the best way to make racial progress in the United States?” And we gave a long list of possibilities, including voting in state and local elections, voting in federal elections, but also organizing in communities, community service, nonviolent protests, and we also included, yes, revolution. And the the answer that was most prominent among African American, Asian American and Latinx young people was organizing in communities. That was the second-most popular answer even among young whites. So I think, again, if we think about the limits of electoral politics where we see young people saying, “Please give us a third party,” and we see their support for something like organizing in communities, then again, we have these kind of clues to understanding what’s happening in the streets right now.

Brancaccio: One of the options was revolution. How many people went for that?

Brancaccio: There is something different now here in June of 2020. Probably plans to ask some of these very same questions again in this different context?

Cohen: Of course, yeah, we want to see if any of this has changed. We want to see if it’s intensified. You know, we want to make sure that we’re also paying attention to the infrastructure of protests that has been building since, I would argue, 2013 and possibly before. So we want to kind of go deeper and understand what are the organizations they’re connected to, who’s mobilizing them into the streets? And why do they think, in fact, they’re there, and what are they fighting for?