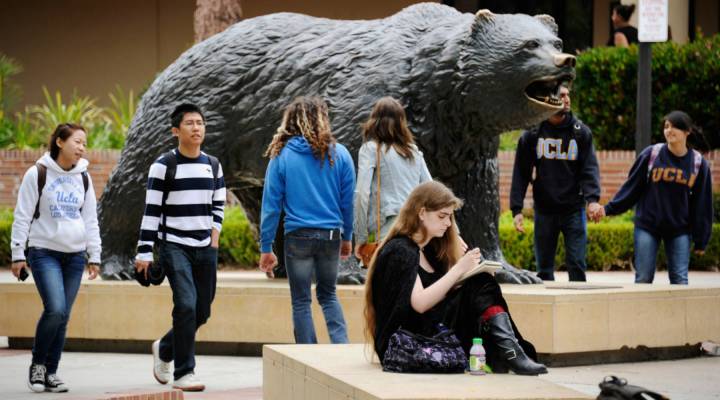 We’re nearing the one-year mark of the Trump administration. With policies that are starkly different from the previous eight years under President Barack Obama, how are young people feeling about the future of the country?

There’s a project out of the University of Chicago called GenForward, which surveys the attitudes of 18-to-34-year-olds, including African-Americans, Latinos (which the survey refers to as LatinX), and Asian-Americans — groups that are often overlooked but make up a significant portion of the millennial generation.

Cathy Cohen, the project’s lead investigator, joined us to discuss her team’s findings.

David Brancaccio: Cathy, this time you asked the 18-34s if things in this country are headed in the right direction. What’d you find?

Brancaccio: You know, it’s particularly striking given the fact that the economy at large is in this long expansion, the stock market’s been going up, supposedly the labor market is tight. But that’s the whole economy.

Cohen: That’s right. So when we think about something like the stock market, it benefits certain groups, generally not millennials who haven’t invested in stock at this point. And when we think about the kind of precarious conditions of the economic conditions, for example, of African-Americans, we can see why in fact that they would be less likely to say that the country is in the right direction. So if we take African-Americans, we know that in general,  the unemployment rate for African-Americans tends to be at least twice that of whites. When we look at millennials, we see the same pattern. But there are also deep concerns about racism and racial attitudes in the country. When you look at it in total, especially for millennials and when you think about the things that they care about, they assess that the country is headed in the wrong direction.

David Brancaccio: All right, so the economy, the country. But what happens when you ask millennials about prospects for their own personal futures?

Cohen: Well, this is a bit of a puzzle for us. I guess maybe it’s refreshing, but majorities of millennials across race and ethnicity say that they feel either very or somewhat optimistic about their own personal futures. And I think this, you know, when you think the country’s going in the wrong direction and that the economy isn’t benefiting you, but you know in fact that you have to move forward, you put your faith in your own future and your own abilities. And I think that’s what we’re seeing with this question. That these young people believe that some way they will find an opportunity that will improve their lives and improve the lives of their families, and thus they feel optimistic about the future.