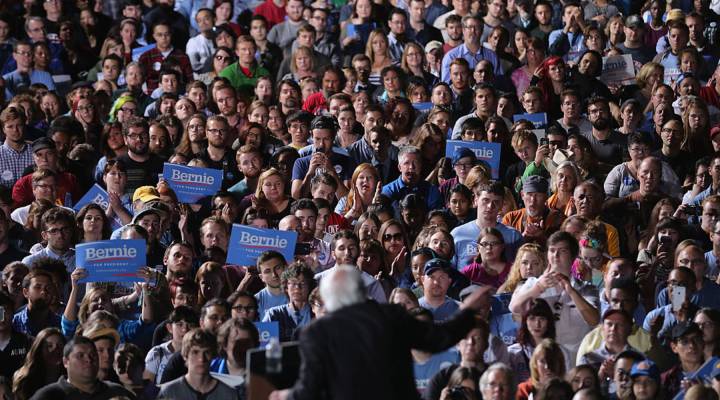 COPY
Thousands of people gather to hear Sen. Bernie Sanders (I-VT) during a presidential campaign rally at the Prince William County Fairground back in 2015 in Manassas, Virginia.     Chip Somodevilla/Getty Images

Millennials are living through a massive upheaval in our economy. From the aftereffects of the Great Recession to the displacement of workers due to automation, they’re inheriting conditions vastly differ than previous generations.

GenForward — an ongoing study that looks at how millennials think about major societal issues, with special attention to race and ethnicity — recently posed questions like these to them.

“The lessening of opportunities, quite often for those who are most vulnerable, have an impact on how these young people think about the economy,” said Cathy Cohen, lead investigator of GenForward and a professor of political science at the University of Chicago.

She joined us to discuss the study’s latest findings on millennials’ views toward capitalism and socialism, and how big of a role they think our federal government should have.

Meanwhile, African-Americans and Latinos expressed greater support for socialism. Cohen pointed out that economic indicators like unemployment are worse for them than other groups, which may play a role in their thinking. The African-American unemployment rate, for instance, is 7.4 percent — about double that of white unemployment.

“When you think about kind of their lived experience and think about their kind of economic conditions, they for sure are thinking, ‘Well, why wouldn’t I be open to socialism if in fact it can provide more economic opportunities for me, for my family and my community?’” Cohen said. “For many [millennials], socialism is not the dirty word that it was for other generations.”

“We can’t control for how respondents think about these issues. But I would suggest that I think for many young people, there was a kind of reintroduction to socialism in the form of Bernie Sanders — who many people thought of as someone’s grandfather,” Cohen said. “And so the idea that there’s a kind of scary socialist country somewhere that is repressing its people was challenged by the ideas of Bernie Sanders, who talked about free tuition and economic stability for all people.”

The role of the U.S. federal government

Millennials across race and ethnicity favor a strong government to handle economic issues.

“They do not believe, in fact, that the free market alone can handle the economic issues that face the country, and in particular, face their generation,” Cohen said.

Less than 40 percent of millennials of any race think that the free market can handle today’s economic problems without involvement from the government.

Unsurprisingly, those reactions diverge a bit more when looking at the respondents’ political parties. While less than a quarter of Democratic millennials don’t think the free market can handle today’s complex economic problems, 56 percent of Republicans do.

Is the government doing a good job?

Here’s where you see a reversal of sorts. While many millennials agree that the United States should have a strong government on principle, many don’t agree that the current government is actually doing a good job in strengthening the economy.

Majorities of whites and Asian-Americans think it’s doing a “very” or “somewhat” good job, while less than half of African-Americans and Latinos do.

“Again, I think this reflects kind of their lived experience in terms of economic opportunities,” Cohen said.

And when it comes to political party, 78 percent of Republicans think the federal government is doing a good job to strengthen the economy, while 44 percent of Democrats and 42 percent of independents do.

Some of this may be a referendum on the Trump administration.

“I think especially when we look at the data by party [identification] or partisanship, what we’re getting are feelings about the current government and the current president,” Cohen said. But she noted that these responses aren’t entirely feelings about Trump, since there’s a split in the Democratic coalition — Asian-American millennials say the government is in fact doing a good job.