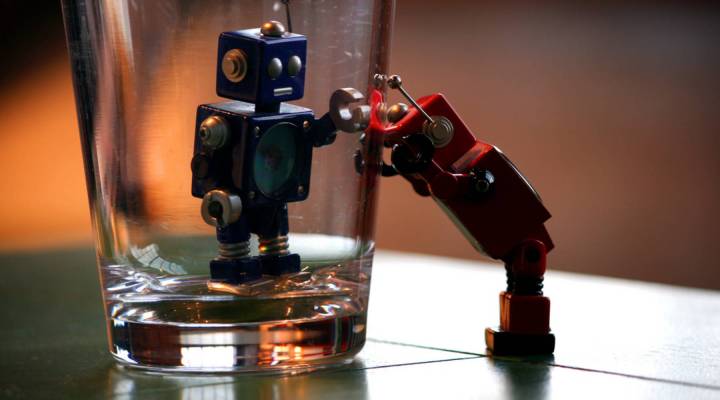 With the advances in technology that we’re seeing, many people are worried about a coming robopocalypse.

Half of today’s work activities could be automated by 2055, according to a report from McKinsey Global Institute released last year. And we’re already seeing some of the consequences in areas like the manufacturing industry, where about 5 million jobs have been lost since 2000.

As these threats loom, a project called GenForward surveyed millennials across different racial groups to find out more about their experiences with technology.

In this survey, GenForward asked how worried millennials are about their job prospects and whether they think the government should have a role in helping displaced workers.

Here were some of its findings (all figures in percentages):

Worries about holding down a job

People of color are especially concerned or at least somewhat concerned about being able to find a job in their line of work as technology progresses.

Keep in mind that many millennials started entering the job market during the Great Recession.

“There was a kind of contraction in terms of jobs that were available, and then there are also the narratives about technology,” said Cathy Cohen, the lead investigator for GenForward. “I think they have a real fear of being able to find a job — and not just a job, but a good job that can support them and their families in a kind of moment when in fact we see an explosion of AI and robotics and computers taking jobs away.”

About 16 percent of African-American millennials say they’re “very concerned” — the highest figure out of all four racial groups.

“There are many threats to that from discrimination and racism, but now also technology and kind of the outsourcing of jobs to other parts of the world,” Cohen said.

Meanwhile, white millennials are the least worried about technological advances negatively affecting their employment prospects, with just 5 percent of members being “very concerned.”

What advances in technology will mean for jobs overall

Responses shifted a bit when GenForward asked millennials more generally if they think advances will increase or decrease the number of jobs in the U.S.

This time a plurality of millennials across racial and ethnic groups said they think tech advances will lead to decreases, including 43 percent of white millennials.

Again, African-Americans — 51 percent — expressed the most concern that jobs would decrease.

“I don’t think it’s just about technology, but it’s a pattern that young African-Americans have experience more broadly,” Cohen said.

Intervention from the government

Given all of these concerns about the future of automation, GenForward asked millennials whether the government should help any displaced workers. It conducted an experiment with respondents: It asked the group if the government is obligated to take care of displaced workers, but with half being told it would mean a substantial raise in taxes.

“I think it tells us something important about millennials. One is they are contemplating what we might call the end of work, or at least the restructuring of work, and what would it mean for them to face an economy where in fact there aren’t substantial numbers of jobs that provide them with an opportunity to provide for themselves and their families,” Cohen said.