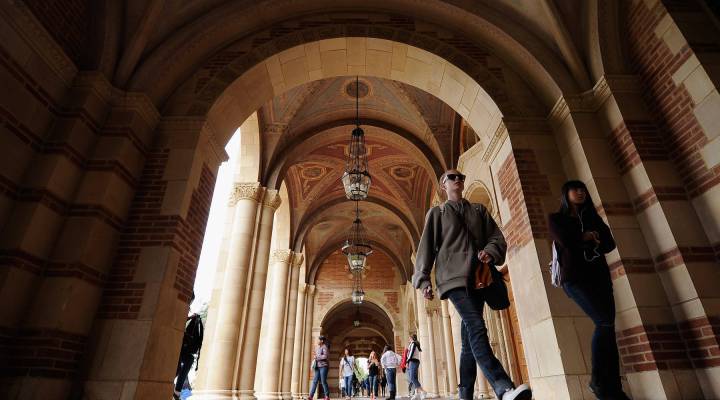 COPY
Students walk near Royce Hall on the campus of UCLA on April 23, 2012 in Los Angeles, Calif. Kevork Djansezian/Getty Images

Marketplace Morning Report host David Brancaccio talked with Cohen about her findings. The following is an edited transcript of their conversation.

David Brancaccio: I used to know a comedian who had this shtick. He discussed some problem, any problem, and then asked, “What’s my point? More money for education,” he would say is the answer to every single problem. That’s, in a sense, what you found when the question is education.

Brancaccio: And one of the features of your survey is that you do glean data based on the race of the respondent and the gender. What did you find? Was there a difference depending on who is answering?

Brancaccio: And how would your respondents use the money if there were more money for education?

Cohen: Well they’d do a number of different things, right? They would increase funding for teachers or pay for teachers, they’d invest again in neighborhood schools. There is a clear sense in the findings that young people believe that the most effective way to impact public education is through really those kind of relationships in the classroom. It would be great, I think they would say, if we had more charter schools or we supported vouchers but if given a priority with a limited amount of money, they want to give it to teachers, they want to support teachers, they want to strengthen teachers unions. They believe in that kind of intimate relationship between the teacher and the student. That’s where in fact we should be making the investment according to millennials.

Brancaccio: What about the issue of teachers unions often criticized from the right as protecting bad teaching? What happened when you ask millennials about this?

Brancaccio: What about views of if it’s not exactly public school? I’m talking about private schools, but also talking about the charter school movement.

Cohen: It’s complicated, I guess I would say, in the sense that young people are looking to improve education so they’re supporting any number of strategies. They are supportive of increasing the number of charter schools. They are supportive of providing vouchers using government funds for low-income students so they are supportive of those types of strategies. But I want to go back and say when given a list that says, “Here are a number of options for improving public education: one option is to increase school choice through vouchers, another one is to increase the number of charter schools, another is to invest in public education at the local level,” they choose investing in public education at the local level. They choose increasing school funding, investing in neighborhood schools [and] providing teachers with increased pay. Those are their priorities.