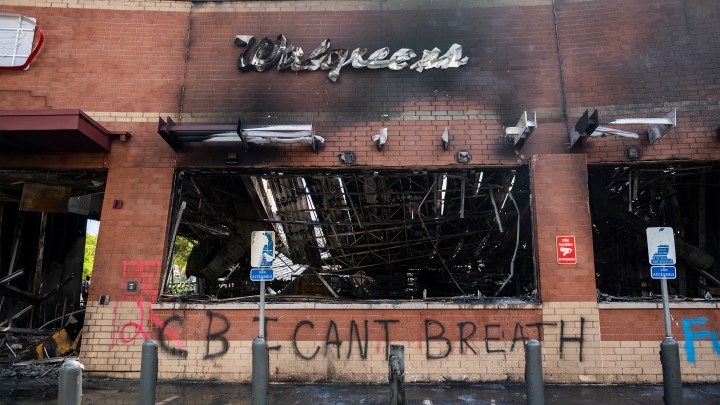 COPY
A burned Walgreens in Minneapolis on May 30. Stephen Maturen/Getty Images
Race and Economy

A burned Walgreens in Minneapolis on May 30. Stephen Maturen/Getty Images
Listen Now

In many neighborhoods that have seen looting and vandalism over the past week, residents are now left with few — if any — grocery stores, pharmacies and other essential businesses. Which is made even harder by the fact that lots of stores are also closed because of the pandemic.

There’s a 6-mile long commercial corridor in South Minneapolis called Lake Street, and it has been destroyed.

In Minneapolis and Saint Paul, hundreds of businesses have been damaged or burned to the ground. The same has happened in cities around the country.

“Low-income families who are underbanked, so they rely on check-cashing businesses, they’re definitely feeling a pinch,” Rider said.

Also, people who don’t have cars to drive to an intact store in the suburbs. And seniors who may have trouble getting around and who are more likely to need prescriptions filled.

“This is all in the background as the pandemic is still very much with us, and some businesses had curtailed certain degrees of operation because of that,” said Tabitha Montgomery, executive director of the Powderhorn Park Neighborhood Association in Minneapolis.

Community groups and churches are trying to fill the gap with donated supplies, but that’s a short-term fix. And Montgomery said she thinks the neighborhood will bear the scars of this moment for decades, even after the stores are rebuilt.