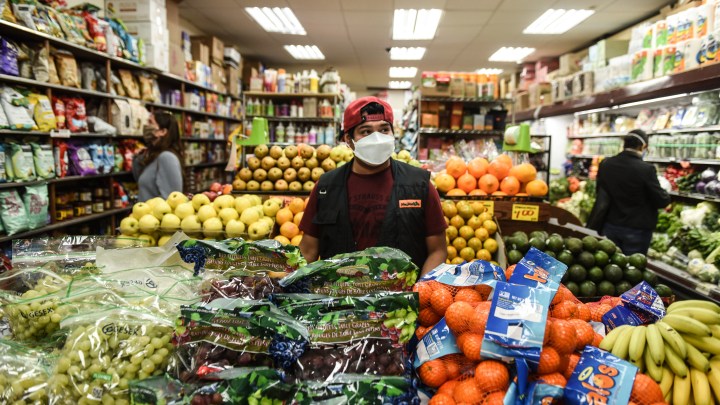 When Christel Orange goes into one of the little corner stores in her neighborhood to grab some groceries these days, it is not easy to keep her distance from other people.

But those tiny stores are her only options if she wants to get groceries without getting in the car. Within walking distance, Orange said, “we have nothing but gas station shopping, corner store shopping and, of course, the liquor store.”

And all of them are usually pretty crowded. At the bigger grocery stores she drives to to do most of her shopping, the checkout lines often stretch down the aisles too.

“Grocery stores visited by lower-income individuals have a higher number of people per square feet, and also their visitors stay a bit longer,” said Serina Chang, a Ph.D. student at Stanford University and lead author of the paper.

The study used the cellphone location data of 98 million people in 10 large metro areas to look at where people are most likely to be exposed to the virus, and found restaurants, gyms, coffee shops, hotels and places of worship to be among the highest-risk places.

It also underlined something that is already well-known: that low-income people and people of color were at higher risk of exposure during the first wave of the pandemic because they were less likely to be able to stay home and avoid crowded places — including the grocery store.

In the 10 major metro areas the researchers studied, Chang said they found “grocery stores visited by lower income individuals have 59% more people per square feet … and their visitors stayed 17% longer.”

People who are lower income and may be living paycheck to paycheck also tend to go food shopping frequently, according to Daniel Block, a professor of geography at Chicago State University.

“The fact that they just might not have as much money available to them in any particular week might mean that they had to go out more often to buy food,” he said. “So that is going to be a larger amount of exposure.”

Exposure to the virus is something people with money have been able to choose to avoid in a way people with less money have not throughout the pandemic — at grocery stores and elsewhere.

“When we look at who has the privilege to work from home, when we look at who’s forced to travel longer distances to get food, and then maybe even compare that to someone who can afford to have food delivered into their houses, it becomes a little more clear why low-income and BIPOC communities are experiencing higher rates of COVID,” said Stef Funk with the Chicago Food Policy Action Council.

“Unlike eating out at a restaurant or going to a bar … you can remove that from your life. But folks are forced, in a lot of cases, to get food from a grocery store,” she said.

Whether or not it’s crowded.

These days, Christel Orange generally goes to the grocery store a few times a week to shop for herself and for her mom, who’s in her 70s and very worried about COVID.

Orange is worried about it too, mostly because of her mom. She doesn’t want to risk picking it up somewhere and bringing it home to her.