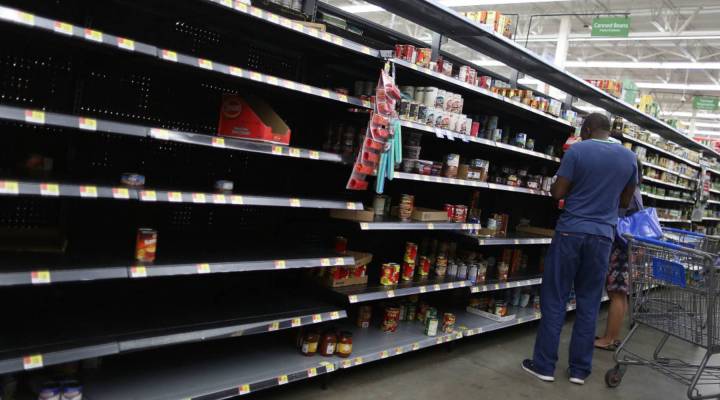 COPY
Restrictive covenants are clauses in a grocery store's lease that says a landlord can't rent the space to another grocer. Joe Raedle/Getty Images

Restrictive covenants are clauses in a grocery store's lease that says a landlord can't rent the space to another grocer. Joe Raedle/Getty Images
Listen Now

For nearly 60 years, the Safeway grocery store operated in downtown Greeley, Colorado. It was old and not always fully stocked, but it provided fresh food for people in the area.

“It was very handy, you know, working downtown for me to be able to stop there and be able to pick up things on the way home,” said Pam Bricker, executive director of the Downtown Development Authority in Greeley.

“Don’t even know that they gave a full month’s notice before the store closed,” Bricker remembered. In a statement released at the time, Safeway said, “For more than a year we evaluated the store extensively and looked at options to improve its performance. Ultimately, our business analysis indicated that we needed to cease operations at that location.”

According to Bricker, it was the only grocery store in downtown Greeley. After that, Bricker had a mission: find a new grocery store for the vacant space.

“So that is exactly what we did, we went out on an offer for that building,” Bricker said. “However the contingency came back that we would be unable to operate any other grocery store for a period of 20 years.”

No grocery store for 20 years. And it all comes down to two words: restrictive covenant.

“So, a restrictive covenant is just a promise where the landlord promises a tenant, in this case a grocery store, that they’re not going to lease other space to competing uses,” said Tanya Marsh, law professor at Wake Forest University. It’s a clause in a grocery store’s lease that says the landlord can’t rent the space to another grocer. Grocery stores don’t want another one next door. And grocery stores are big clients, so landlords are inclined to listen.

“They’re routine,” Marsh said. “There’s hardly a grocery store in the United States that does not benefit from these kinds of restrictive covenants, they’re just standard in the industry.”

But when stores close, critics say these restrictive covenants can lead to food deserts — areas where it is difficult to buy affordable or quality fresh foods.

“Grocery stores are actually vacating these communities and placing restrictive deeds preventing grocery stores from moving in for up to 15 years,” said Lauren Ornelas, executive director of the Food Empowerment Project. “Teenagers who are 15 years old have never had a grocery store in their community.”

So what’s in it from the grocery store’s perspective?

“If they have sister stores which they still operate within a distance of, for example, two or three miles, they may wish to protect their sales out of concern that the space they’re vacating would go to a competitor,” said David Rogers, president of DSR Marketing Systems, which conducts location analysis for grocery retailers. “Everyone is very aware these days about the political significance of food deserts, but there’s other issues of competition.”

For grocery stores, profit becomes the motivating factor for opening or closing a location. And location becomes an important factor to look at.

“If the area is coming up or going down or stagnant,” Rogers explained. “Cost of rents is a big issue.”

Across the grocery industry, online shopping has become another major concern. More sales are moving online than ever before and it has grocery stores worried.

“Top of mind right now is Amazon, but I think it’s overblown,” Rogers said. “If you are a market retailer that serves the Amazon Prime type of customer, you are concerned about the fact that Amazon can now integrate Whole Foods with their prime memberships, but if you are a retailer that’s serving average incomes or lower incomes, I don’t see how Amazon is as great a threat.”

“The other major impact now taking place in the U.S. grocery industry is the growth of the limited assortment retailers like Aldi and Lidl and Save-A-Lot,” Rogers said. “Their stores may be 10,000 square feet or 20,000 square feet in size, so they can slot into a lot of sites, even those in food deserts.”

Those retailers, Rogers said, have the potential to contribute to solving the problem of the food desert — with one caveat.

“As long as it’s profitable for them,” he added.