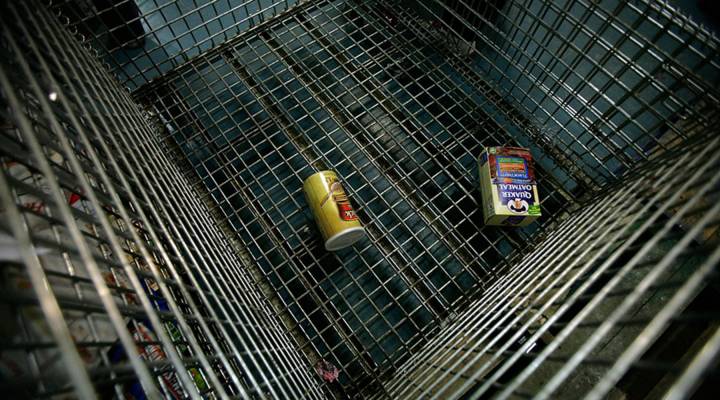 The former grocery store in the village of Carrollton, Ohio, looks like your typical creepy abandoned building. It’s dark inside. It’s boarded up with moldy wood.

Last January, residents of Carrollton — population 3,135 — showed up to find the doors locked and a sign attached that read, simply, “store closed.” It was the only dedicated grocery store in a county of nearly 28,000 people.

Carrollton is located in eastern Ohio’s Carroll County, about a 40-minute drive from Canton. Tait Carter, the county’s economic development director, peered through the doors of the 30,000 square foot building. She said the place shut down abruptly.

“The electric company came in and shut the electric off, and all of the food was still left in all the coolers,” Carter said. “I don’t even want to imagine what it smelled like in there.”

This store was owned by Thorne’s Market, a local grocery chain founded in 1972. The company closed its four stores in January and disconnected its phone. The owners haven’t given a reason.

“I think they’d been struggling for a while,” Carter said.

Even before Thorne’s closed, Carroll County was a food desert. In rural places, that’s a low-income area where at least 500 people or one-third of the population live more than 10 miles from the nearest supermarket or large grocery store. About 4.5 million Americans live in rural food deserts, according to the U.S. Department of Agriculture.

“In the Mississippi Delta, in rural Kansas, in upstate New York — in every rural community across the country, you’re hearing about a food-access challenge,” said Julia Koprak, a senior associate at a nonprofit called The Food Trust.

There are long-standing reasons, like falling populations in rural towns, she said. But the competitive scene has also gotten harder for small rural grocers. During the past year, Walmart has been lowering its prices to compete with Amazon and with discount supermarket chains. That has led to price wars that hurt small grocers, said Scott Mushkin, a managing director at Wolfe Research.

“If you have supermarkets in a rural area … [and] Walmart decides to sell milk for 76 cents a gallon and eggs at 44 cents, now all of a sudden you have to compete against that,” he said. “You’re going to be just losing money hand over fist.”

And if you don’t cut prices, your customers might buy groceries online or drive to the nearest Walmart that sells them. There’s one about 40 minutes from Carrollton.

Once a town’s only grocery store closes, residents are left with few options. In Carrollton, people end up shopping at discount stores like Dollar General Market. It carries some basic fresh foods like apples, bananas and potatoes.

Gail Risaliti, 62, pushed a cart through the frozen-food section. She rattled off the items on her list that she can’t buy at the store: big tubs of plain yogurt, all kinds of cheeses, good olive oil. To get those groceries, she drives to a supermarket in Minerva, about half an hour away.

“Personally, I can’t stand not having a grocery store in town,” Risaliti said. “And I think a whole lot of people feel the same way.”

Other places that have lost a grocery store have come up with creative workarounds: a student-run grocery store in Nebraska, a public-private supermarket in Kansas.

Carter, Carroll County’s economic development director, has been trying to bring a new grocery store to Carrollton. Recently, she tried to woo the discount grocery chain Aldi. A local realtor knows the CEO.

“I was like, ‘Perfect. See what you can find out for me. That would be, you know, great if they want to come visit the property and check things out,’” Carter said. But Aldi told her it won’t open a store unless at least 50,000 people live in the area, she said. Carroll County’s entire population is just over half that.

“So we’re still trying, but it’s tough,” Carter said. “We just don’t meet those numbers.” And Carter said she can’t just snap her fingers and make tens of thousands of people appear in the county. Especially not without a grocery store.