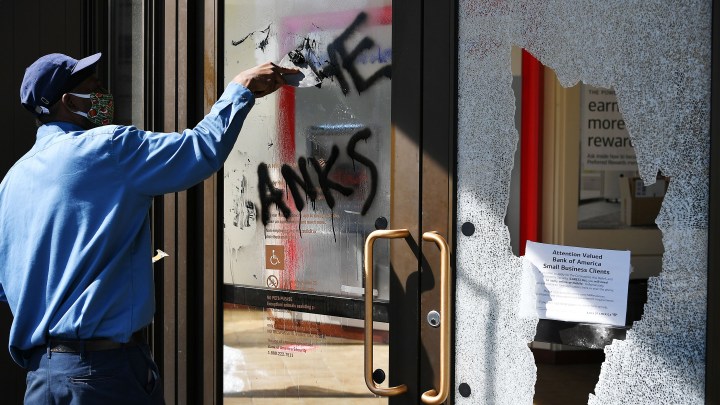 COPY
A worker cleans up a damaged bank Monday in Washington, D.C. Mandel Ngan/AFP via Getty Images
Race and Economy

Many American cities experienced some form of violent upheaval over the weekend. In Minnesota’s Twin Cities, at least 270 businesses were vandalized, looted or damaged. Miami, Eugene, Oregon, Los Angeles and Santa Monica, California, all suffered instances of looting and destruction. Communities take a long time to heal from these kinds of events.

Anthony’s Pipe & Cigar Lounge is on West Lake Street in Minneapolis. Tom Harlan runs it, and he’s been doing business there for 35 years.

“They broke all my cabinets. Everything was shattered. They broke my humidor. They broke into the office, broke my safe [and] blew up one of my security cameras,” Harlan said. “They even took the plywood off the barbershop across the street and broke the glass and went in there.”

He said the whole area is boarded up and sprinkled with graffiti now.

“Last night, I was just shaking,” Harlan continued. “I was on my patio trying to drink a beer, and I was just trying to gather my thoughts and see how I can regroup.”

In Santa Monica, Jane Walker is manager of a sweater store called Texture. Her store was boarded up and survived unscathed, but other businesses near her did not.

“Here you are, coming back from COVID, and now with this,” Walker said. “I mean, to recuperate from this is going to be a very long haul.”

Victor Matheson, professor of economics at College of the Holy Cross, looked back at the Rodney King riots, which happened in L.A. in 1992.

“Economic activity in the areas affected didn’t return for at least 10 years,” Matheson said. At least not to previous levels. He said those riots cost almost $5 billion in economic activity measured in lost sales over 10 years. “If people don’t feel safe where their businesses are, then they don’t feel a need to rebuild.”

Matheson and his colleague at Holy Cross, Rob Baumann, compared the economic recovery from the L.A. riots with the recovery from Hurricane Andrew in Miami, which happened the same year. Miami, Matheson said, “recovered a heck of a lot faster.”

Investors and businesses felt more comfortable returning to Miami, but another reason comes down to how the government responded.

“The reaction of the federal government was a lot more swift, and they spent a lot more money in the case of Miami,” Matheson said.

People rebuild from hurricanes and can prepare for them, he said. Social problems seem a lot harder for the country to grapple with.