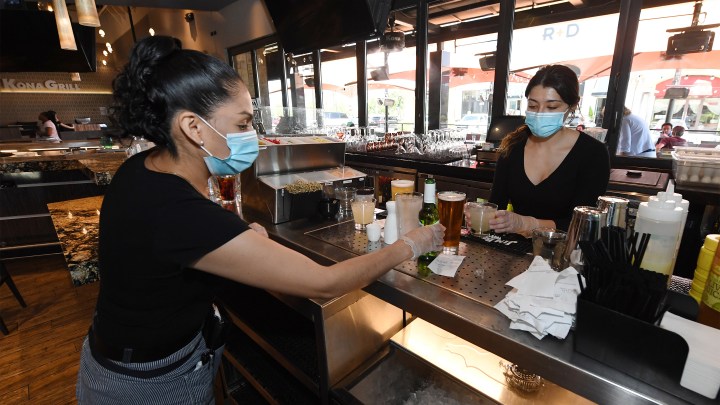 COPY
Two servers at a reopened restaurant in Las Vegas. The jobs that have been lost recently, like servers and retail clerks, are mostly done by women. Ethan Miller/Getty Images
COVID-19

Two servers at a reopened restaurant in Las Vegas. The jobs that have been lost recently, like servers and retail clerks, are mostly done by women. Ethan Miller/Getty Images
Listen Now

The Labor Department said Thursday that another 2.1 million people filed for unemployment last week. And most of the workers who lost their jobs last month were women — 55%, according to outplacement firm Challenger, Gray & Christmas.

Think about the job losses right now. Clerks at retailers, restaurant servers, office assistants. This is work done mostly by women. And these jobs aren’t all coming back. Forty-two-year-old Adriana Lona lost her event-planning position at a nonprofit near Chicago.

“Given everything that happened, I would most likely have to give up that role, yes,” Lona said.

Industries that mostly employ men — think manufacturing, construction — haven’t lost as many jobs during the coronavirus pandemic. That’s the exact opposite of what happened during the 2008 financial crisis. Jasmine Tucker, director of research at the National Women’s Law Center, said that was called a “man-cession.”

According to her research, we’re in a she-cession. And women could have a harder time getting back into the workforce than men did after the Great Recession — especially women who have kids. Like Amy Gergely, in upstate New York. She lost her tech job in mid-March and is now the primary caregiver and home schooler for her 8-year-old son.

“And I really don’t know how that will pan out when I’m looking for a full-time job,” she said.

Some new jobs are being created right now, according to Andrew Challenger of Challenger, Gray & Christmas.

“The jobs that are being added tend to be on the back end — on the supply chain, logistics, in the warehouses,” he said.

But that work is mainly done by men.