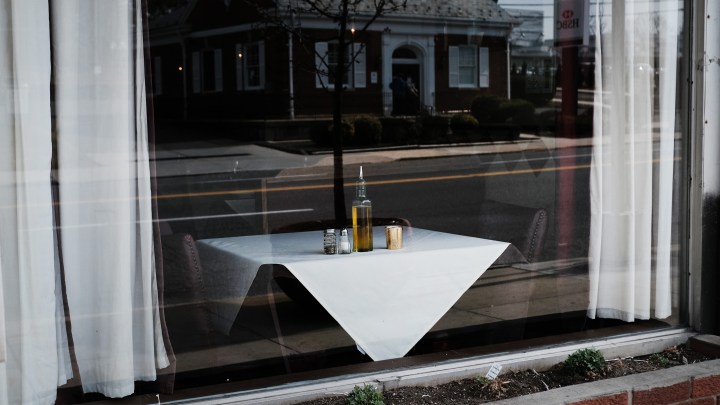 COPY
Some eateries decided they couldn't hire back all of their employees. Spencer Platt/Getty Images
COVID-19

Some eateries decided they couldn't hire back all of their employees. Spencer Platt/Getty Images
Listen Now

Emergency loans are lifelines to small businesses and their workers, with unemployment skyrocketing during the COVID-19 pandemic. Still, the emergency loans from the federal Paycheck Protection Program come with a lot of strings attached. Some businesses have started to question whether the loans are worth it.

Back in mid-March — before the PPP program started — Heather Whaling ran the numbers for the PR company she runs, called Geben Communication. She had already made cuts to her business and realized her outlook was pretty good.

When the PPP launched on April 3, she didn’t apply.

“It just felt like there were other people who needed the money more than we did,” Whaling said.

Plus, forgiveness of a PPP loan is based on the requirements that businesses maintain or quickly rehire employees and maintain salary levels. Whaling said she didn’t want to be held to those kinds of requirements.

“That could potentially make me make decisions that maybe weren’t in the best interest of the company long term, but I was making them because of some requirement of a loan that I had to fulfill,” she said.

Part of the issue is that for many people who have lost their jobs, unemployment insurance — which includes $600 a week in emergency pandemic benefits — pays more than what they’d be making if their old employers hired them back.

Matt Hetrick runs an accounting company called Harmony Group in Maryland. It works with small businesses, including a lot of restaurants.

“You can’t really say to a line cook, ‘I want you to come back and work 50 or 60 hours a week to make less money and put yourself at risk,’ ” Hetrick said.

Some restaurants have been looking at that math and realizing the Paycheck Protection Program isn’t really worth it.

Villamora didn’t apply for a PPP loan. Even if Bad Saint reopened, she doesn’t think she’d have the business necessary to hire back all of her workers or the space for people to work safely.

“Restaurants are packed, usually, in the dining room and in the back of the house — in many of the parts where you can’t see where staff are working,” she said. “It’s a lot of people. It takes a lot of people to run a restaurant.”

The loans charge 1% if they aren’t forgiven. But Villamora said for businesses like hers, that could still mean having to shell out big monthly payments.

“We’re a really small restaurant. We have 17 employees,” Villamora said. “Any amount of debt we are taking on is a big deal to us.”

In the meantime, she’s been applying for private grants.