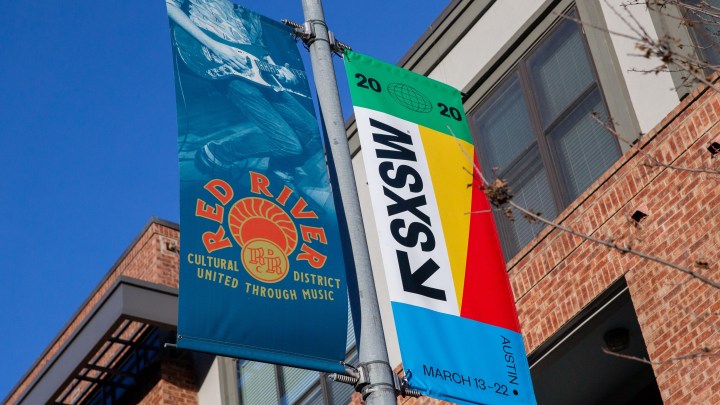 South by Southwest, the massive film, music and technology conference that happens in Austin, Texas, every March, has been cancelled due to COVID-19 concerns. The festival organizers announced Friday that “the City of Austin has cancelled the March dates for SXSW and SXSW EDU.”

It’s the first time in 34 years that the festival will not go ahead.

What’s the mood for all of the folks who will be affected? Many are in disbelief. SXSW (or “South by”) brings roughly $350 million to the local economy, according to some estimates, affecting virtually everyone in Austin.

Elizabeth Mathis, who works at a bar called Javelina on Rainey Street in Austin, spent part of Sunday night talking to her fellow bartenders about what they were going to do next.

“I think it’ll be OK,” she said. “I am worried because we were all expecting to have that extra push. It’s our bonus, pretty much. I got hired here in May and I was holding out expecting to be here in March for South by. “

Mathis said she was concerned about COVID-19 with so many people coming in from out of town, but now she’s worried about her ability to pay rent.

The SXSW cancellation is going to be a shock to the pocketbooks of bartenders and Uber drivers and in Austin, but the economic effect will extend far beyond the service industry.

At a graphic design shop in west Austin called Graphics Guys, owner Byron Mowery is running a machine that cuts some promotional material for a new Richard Linklater movie. Mowery’s business wraps vehicles and walls with promos, produces and installs banner displays on buildings. He says losing the business from SXSW is a shock to the system.

“It’s tough, man, it sucks. It really sucks, I don’t know how else to put it,” Mowery said.

For Graphics Guys, the ten days of the festival are like Black Friday and Christmas rolled together. Mowery said it can float him for at least a few months if things slow down in the summer.

“We stand to not write up $75,000 in business just for this month based on South by, which is huge for us; we normally double, triple sometimes quadruple our monthly net based just on South by,” he said.

Mowery said he’ll likely be able to withstand the hit because he has a low overhead and serves a lot of local business that he’ll now prioritize with Southby out of the mix.

On the other side of town, Brent Underwood, owner of the HK Austin hostel, isn’t so sure his business will survive. For months, the hostel was booked up during SXSW. On Friday, within hours of the cancellation announcement, 90% of the bookings disappeared. Underwood said that doesn’t just mean that he can’t afford a vacation this year.

“It’s more like, I don’t know how we’re going to pay the property taxes this year because of the loss of income. And so it’s a pretty substantial loss,” Underwood said.

He took a deposit when guests booked rooms, but he refunded 100% of the booking because of the circumstances. He said this has him thinking about making the deposit non-refundable in the future.

Underwood is not the only business owner taking a serious look at his contracts and terms and conditions. There was speculation that the corporation running SXSW would be able to collect insurance money because the city declared a local state of emergency. But now it appears the COVID-19 outbreak might not be covered.

“So a lot of times something like this would fall under what we call the ‘force majeure’ provision. And the force majeure provision basically says, if these things happen, meaning things that are typically outside of the control of either party, that you have the right to cancel the contract,” explained Lauren Spahn, an entertainment lawyer in Nashville.

Spahn said she doesn’t think many SXSW contract disputes will end up in court, though, because that could hurt business relationships in the long term.

For now, businesses in Austin are just trying to get through March. Community organizations have arranged makeshift music and food events and even a couple of online fundraisers to help cushion the blow. But many business owners here face a tough call in the weeks ahead: take out a loan to keep things afloat, or just skip rent this month and risk eviction.