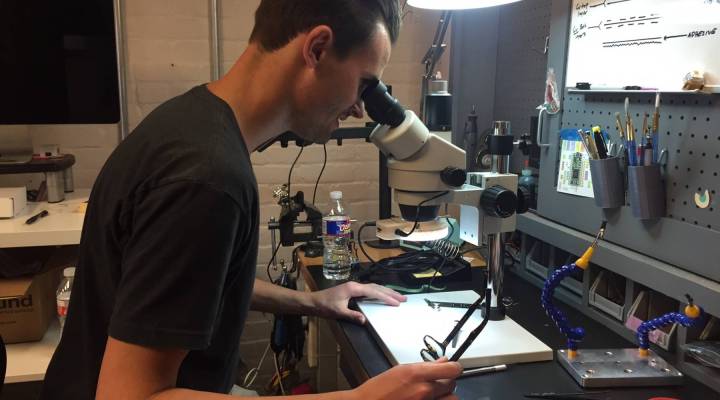 Wash your hands…or your shirt will tell on you

Wash your hands…or your shirt will tell on you

Tacos and barbecue aside, there are a host of reasons that people from around the country and around the world come to SXSW Interactive.  It’s the largest portion of the annual festival of music, film, and ideas. Brands want to raise their profiles, panelists want to push their agendas, venture capitalists want to take meetings. Lots of people are really just here to search for the newest trends in interactive technology.

One Austin company that benefits from that focus — and is at the bleeding edge — is Chaotic Moon. It was acquired by Accenture last summer, and its products run from a device that lets you know when your fly is down to smart clothes that could tell when a health care worker hasn’t washed his hands.

“A lot of our clients are in the health care industry, and there are trillions of dollars lost due to errors,” said Eric Schneider, creative technologist at Chaotic Moon. “A lot of the errors come from fatigue, cleanliness, and so forth.”

Schneider explains that they’re working on technology that could remind workers to wash their hands, or take a nap. “But rather than the notification coming from your phone, it’s coming from the hospital itself. The room you’re in, the hallways you’re walking through, everything is coming from that, through a series of eye beacons.”

We broadcast the show today from their lab space, where you can find 3D printers churning out prototypes, gaming controlers, and a sign labeled “Hackatorium.”