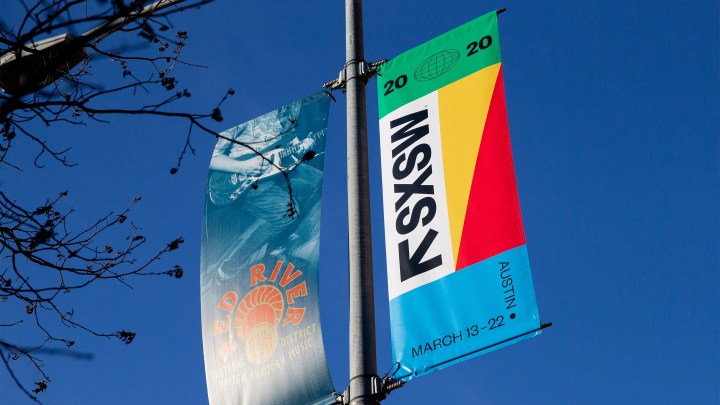 COPY
Austinites who depend on the annual festival are hurting. Suzanne Cordeiro/AFP via Getty Images
COVID-19

Austinites who depend on the annual festival are hurting. Suzanne Cordeiro/AFP via Getty Images
Listen Now

The cancellation of South by Southwest was a defining moment for some — it was when the growing threat of COVID-19 got very real for a lot of people. Especially for the many Austinites who depend on the festival’s influx of cash.

Byron Mowery, owner of Graphics Guys, now commutes into an all-but-empty office on Austin’s West Side every day. Before the crisis, Mowery’s business wrapped vehicles and walls with promotional material for things like movies and concerts. Now, he’s producing different stuff.

Graphics Guys’ business is down 70% from last year. Mowery laid off almost all of his staff; he’s now doing most of the work solo. He’s applied for every piece of government assistance available, something very new for him.

“I’ve been self-employed for over 20 years and never had to ask for any type of money from the government, so this is a very awkward situation,” he said.

In East Austin, Brent Underwood isn’t worried about awkward situations. He owns and operates a 20-bed hostel, HK Austin, and applied for help from the government immediately.

“Because we only have one full-time employee, we got $1,000, which certainly is appreciated but doesn’t put that big of a dent in our monthly expenses,” Underwood said — particularly since he has no bookings right now and the hostel has been empty for the past month.

His bank is deferring his mortgage payments for three months, which will help keep his hostel afloat for a little while. He’s trying to stay positive, but knows he’s in for continued tough times.

“I don’t think people are going to start traveling or, particularly, staying in rooms with multiple beds anytime soon, so the future months are going to be interesting, for sure,” Underwood said.

“Interesting” is one way to put it. When 29-year old bartender Elizabeth Mathis thinks about how she’s getting by, a different word altogether springs to mind. “Unemployment,” she said.

She filed for benefits a month ago, the same day she found out that Javelina, the bar she worked at on Austin’s Rainey Street, was closing its doors. The unemployment office got back to her within 48 hours, letting her know she was also going to get SNAP benefits (food stamps) on top of unemployment pay.

“So, I’m able to pay all my bills and luckily my landlord is super kind and understanding and he was working with me if I needed to pay in payments,” she said.

She’s been spending her time taking pictures and painting, trying to build up an art portfolio. Ultimately, she wants a job in the arts. Bar-tending, she said, was just a way to pay the bills. But, she admits, she can’t wait to get back behind the bar, if and when things begin to normalize.