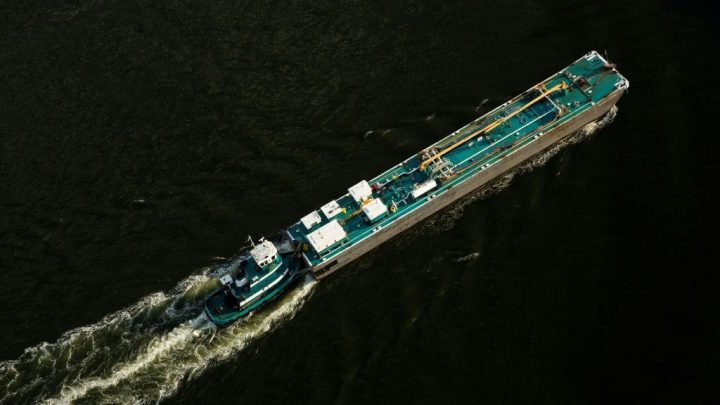 COPY
Austin Golding, president of Golding Barge Line, said that, even amid the aftermath of Hurricane Ida, his top concern onboard is still COVID-19. Kena Betancur/AFP via Getty Images

Austin Golding, president of Golding Barge Line, said that, even amid the aftermath of Hurricane Ida, his top concern onboard is still COVID-19. Kena Betancur/AFP via Getty Images
Listen Now

Business is far from where it was pre-pandemic for Austin Golding, president of Golding Barge Line. Despite widespread damage in communities throughout the South and mid-Atlantic, the aftermath of Hurricane Ida isn’t necessarily the top of his concerns. For Golding, the biggest issue is still COVID-19.

Crewing the barges has been an issue for Golding in the past, but now he’s set a goal to encourage his employees to get vaccinated. “We’re probably closing in on 60-65% vaccinated,” Golding said in an interview with “Marketplace” host Kai Ryssdal. “And we’re trying to push as many as we can voluntarily to get it.”

Golding spoke with Ryssdal about the risks posed by climate change and his efforts to vaccinate his crew. The following is a transcript of their conversation.

Kai Ryssdal: I have to tell you, when I heard that storm is coming through — and maybe this is me being too close to my sources — one of the things I thought of was, “Man, I wonder how Vicksburg [Mississippi] is doing.” Did you do all right?

Austin Golding: Oh yeah, we were lucky to be on the west side of [Hurricane Ida]. So, [with] all that dry air, that kind of cooled it off once it got into the mid-part of Mississippi, we barely had any rain. It was nuts.

Ryssdal: Wow. But I mean, I heard from the Corps of Engineers [that] the Mississippi River reversed itself. Did that not hit you?

Golding: It did down around Baton Rouge, so probably 200 or 300 miles south of here. And it wrecked probably 300 to 400 barges and a couple dozen boats, at least. No injuries or deaths, which is pretty unbelievable. But the hurricane came through in a path that was almost perfect to disrupt the Lower Mississippi River right around [the] New Orleans area. I don’t think we’ve ever seen anything like it.

Ryssdal: You know, it strikes me that your company and your whole industry is part of the infrastructure that is going to be affected by climate change most immediately, right? I mean, all businesses are going to have to deal with it. You, though — it’s literally a structural issue for you. And you’ve got to be taking that into consideration as you plan the next 10-15 years of your business.

Golding: We are. An interesting debate that broke out around this, where, you know, the $15 billion that was spent on the flood walls and everything that was put in place to protect New Orleans, it worked. But $15 billion is a lot of money. And if that’s the type of price tag it’s going to take for these coastal communities to live through climate change, there’s gonna be some that can foot the bill, but many that can’t. Luckily, on the inland side, where boats and barges are, we haven’t seen anything in our infrastructure that’s been disrupted totally by climate change. And, you know, at the end of the day, more water is good for me. You know, it comes with pluses and minuses. But if it takes $15 billion to protect an area that we operate in, you just got to wonder how much that investment can be replicated in places that aren’t so fortunate or don’t have as many eyeballs on them.

Ryssdal: Alright, different topic, but same general thrust: How’s the pandemic treating Golding Barge Line? I mean, are you guys busy? What are you seeing?

Golding: Our market is still significantly off. Volumes are not back in the petroleum world where they were, and there’s some volume that may have gone away completely. And probably [the] most day-to-day pertinent challenge is trying to push vaccine and push safety measures instead of trying to message on COVID so we have healthy crews and a healthy workforce. That’s been a real challenge for us.

Ryssdal: Well, yeah, say more about that. Because I was looking back over a past couple of interviews, and I think three in a row now, we’ve talked about staffing and the challenges you’re having. Is that still the case?

Golding: It’s still the case. You know, naturally, we met that challenge with a small wage increase, but just like we talked about, our business isn’t back — so that’s kind of counterintuitive, but we had to do it. But second of all, you know, we’ve seen an increase in [the] amount of COVID cases, which makes it harder to crew. In our office here, we’re 100% vaccinated. Onboard, we’re probably closing in on 60-65% vaccinated, and we’re trying to push as many as we can voluntarily to get it. It’s good for business, but it’s good for our employees, and it’s something a good business owner with strong moral standard needs to be a proponent of.

Ryssdal: Yeah, no, I totally get that. But let me be clear, you’re pushing, but you’re not mandating, right?

Golding: We haven’t mandated yet, and so far we’re continuing to gain ground without said mandate. Now, I will also be the first one to tell you that if we mandated it, we would have several employees run to places that don’t take COVID as serious as we do. I would love to have an easy button mandate, but we don’t have that route available to us. We’re making the most of what leverage we do have.