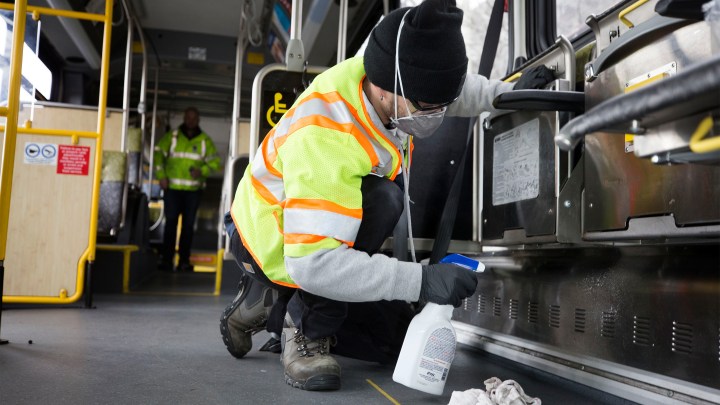 After a shopper tested positive for COVID-19, the North Star Mall in San Antonio closed for a “deep cleaning” this week. The same thing happened at a casino in Oregon. When businesses need to sanitize, they call people like Thomas Licker, the division manager for Infection Control Technologies in central New Jersey.

“We have seen a surge in phone calls and business opportunities,” he said.

There’s no law mandating that kind of deep cleaning. But besides helping keep customers and workers healthy, the extra elbow grease is a good legal defense, according to attorney Melissa Peters with Littler Mendelson. But Peters also says businesses aren’t likely to be sued as long as they’re doing basic cleaning.

“If they are following the guidelines that are being put out by organizations like the CDC and the World Health Organization, I think it would be very hard to find them negligent,” Peters said.

Keith Miller owns three Subway shops near Sacramento and is required by law to provide a safe workplace for his employees. Subway is sending out cleaning reminders. Plus, all of Miller’s workers wear gloves.

“[And] if you scratch your head, touch your face, moved your hat, you have to change your gloves,” Miller said.

Miller says you can only do so much. You can’t wipe off the door every time customers come in, or make them prove they don’t have COVID-19. You can’t make them wash their hands.

He’s telling workers to stay home if they’re sick; they get three sick days a year. The virus keeps him up at night.

“Of course you’re worried about that because then there’s an outbreak at your store, and even if you can’t get sued you’re probably shut down by the health department for a while,” he said. “And yet you haven’t necessarily done anything wrong.”