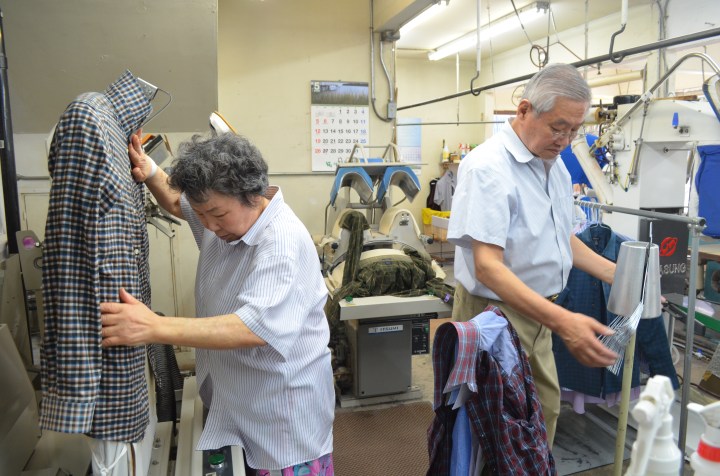 On a Wednesday morning at Sun Cleaners in Seattle, Hyen Sook Kang and her husband Tae Park were busy pressing clean shirts, arranging them in machines that stretch and steam them. Kang and Park have owned this dry cleaning business since 1985.

Kang said she first started to worry about the chemicals they were using when a woman at her church, who also owned a dry cleaner for decades, got sick. Kang learned the woman had stomach cancer.

“At the hospital, they told her to quit dry cleaning,” Kang said in Korean, through an interpreter. “They said, ‘Don’t do dry cleaning anymore. It’s dangerous.’”

California has passed a complete ban on perc which comes into force in 2023, and several other states have offered financial or technical assistance to dry cleaners to help them stop using the chemical.

Sun Cleaners is one of eleven businesses in the county so far that have received grants to make the switch. Kang said part of the motivation for the change were her own health problems.

“The perc hurt my chest and made me dizzy,” she said. “It’s horrible.”

The EPA says perc can cause headaches and dizziness. National Institutes of Health studies have found that people who work in dry cleaning stores that use perchloroethylene are at increased risk for some cancers and for kidney disease.

A trade group representing perc manufacturers disputes those findings, saying that evidence of cancer in humans is “limited at best” and often “confounded by exposure to other possible carcinogens.”

But state regulators are also concerned about environmental effects: When perchloroethylene is spilled, it can leak through unsealed concrete and eventually into groundwater. The manufacturers’ trade group says the risk of leaks is minimal because the newest dry cleaning machines only require a small amount of perc and are sealed to prevent leaking.

One reason many dry cleaners might want to buy new machines is that it’s possible they’ll have to stop using perc soon.

The EPA has already ruled that dry cleaners in residential buildings, like Sun Cleaners in Seattle, have to stop using perc machines by the end of 2020.

And the agency could expand that ban; perchloroethylene is on a list of ten chemicals under consideration for a total ban.

“A big part of this program was so we could help our local dry cleaners,” said Ashley Pedersen, a policy liaison at Seattle’s local hazardous waste management program.

Pedersen said the reason the county is offering grants instead of handing down a ban is to make sure dry cleaners both stay in business and switch to the safest alternative to perchloroethylene.

Back at Sun Cleaners, Kang says that since she and Park took the grant to get the wet-cleaning machine, she feels better.

“I don’t get tired, not at all, after switching to this new machine,” she said.