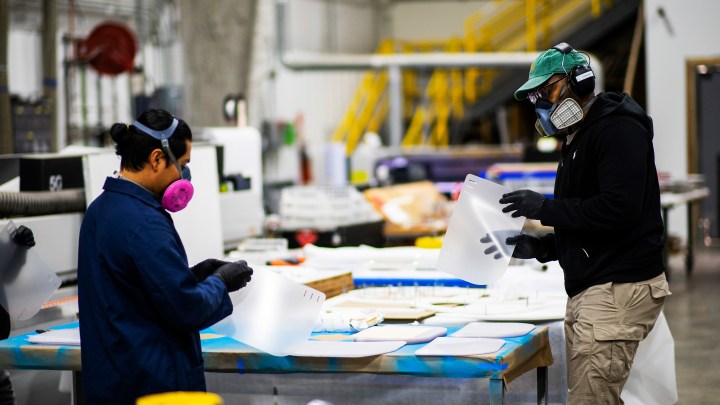 Two separate releases of government data Wednesday gave us more proof that the economic pain of this pandemic, and the benefits of the recovery so far, are not distributed evenly.

The number of Americans filing first-time unemployment claims was up again this week, to 778,000. That was more than economists expected. It reflected a weakening of some parts of the economy as COVID-19 cases increased across the country.

In contrast, orders for big-ticket items were a rare economic bright spot. The U.S. Census Bureau announced that new orders for manufactured durable goods in October increased by $3 billion, or 1.3%, to $240.8 billion. This was the sixth consecutive month the number of orders had gone up.

That is still down about 9% from a year ago, said Scott Paul, president of the Alliance for American Manufacturing. He added, “Manufacturing is certainly doing a little bit better than the rest of the economy. But compared to last year, we’re still very, very far behind.”

It turns out that Paul himself is an example of why durable goods numbers keep improving. He told Marketplace, “I was expecting this afternoon a washing machine delivery — speaking of durable goods — to arrive at our house at some point in time because our old one broke. “

Machines do break and need replacing, while families and schools need more computers for remote work and learning. Wednesday’s release also showed demand was up for communications and electrical equipment. All these categories kept manufacturers busy.

Another factor that helped the sector, said Beth Livingston, who teaches management and entrepreneurship at the University of Iowa’s Tippie College of Business, is that many factories are used to complying with ever-changing safety regulations.

“So it wasn’t that difficult to adapt those those … safety and health trainings to include COVID-based issues,” she said. And, Livingston pointed out, many manufacturers were dubbed essential during the pandemic, like those making masks, medical and cleaning supplies, bread machines and toilet paper.

With this pandemic lasting for so long, companies had time to adjust. Livingston said: “One thing that has happened over the last six months is that we have a much better grasp on what demand looks like in the sort of pandemic economy.”

But it’s just the opposite for many in the service sector who rely on in-person customers. For numerous small businesses, the longer the pandemic goes on, the less they are able to hold on.

Shobha Tummala knows that firsthand. She owns a shrinking chain of hair removal salons in Maryland, Washington, D.C., and New York. “We had eight locations and we were growing before the pandemic, and we’re at five locations, and maybe even we’ll have to go down to four,” she said. “One location is struggling a little bit.”

Tummala said her revenue is down by more than half. She had to switch all her service providers to part time and lay off half of her office staff.

She’s said she’s exhausted. “I always felt like I could work a little bit harder … to be able to provide for everyone as part of the company. And I can’t work any harder to make it happen, and just have to kind of wait and see and hope things turn around.”

Tummala added that she’s frustrated with Congress and the White House for not providing additional economic help, and for leaving her and her employees to the mercy of the pandemic and politics.