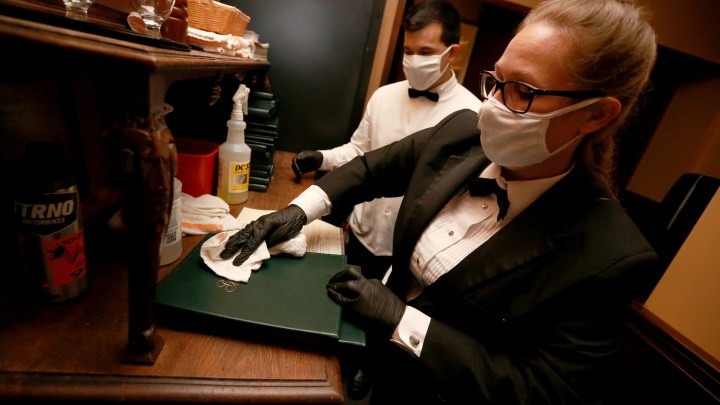 COPY
Many businesses are still investing time and money in sanitizing for COVID-19 safety, though it may be unnecessary. Sean Gardner via Getty Images
Back to Business

Many businesses are still investing time and money in sanitizing for COVID-19 safety, though it may be unnecessary. Sean Gardner via Getty Images
Listen Now

Back when the pandemic began and little was known about how the virus spreads, workplaces started to clean … everything. Now, we know much more, including that COVID spreads mostly through airborne particles.

But businesses are still cleaning, and it can sometimes feel a bit performative.

Joel Davis is with Premiere Cinemas, which has locations in five states. Those serve-yourself butter machines for popcorn that are essential to some moviegoers’ experience? They’re no longer serve-yourself.

“We actually had to put an attendant there. They would actually ask people what they’d like to have,” Davis said.

While customers may not love having to ask for an embarrassing amount of butter, Davis doesn’t love it either because he has to pay someone to stand there. And he’s spending a lot of money disinfecting between shows.

Then, of course, there’s the rising cost of cleaning supplies.

Ganahl thinks the gloves are a necessity. But other things feel like COVID cleaning theatrics. Up until last week, he was decanting ketchup into little plastic cups — even though table condiments are sanitized between customers.

All that extra cleaning probably isn’t necessary anymore, said Josh Petrie, who researches respiratory viruses at the University of Michigan.

“While it’s possible that you could get COVID from touching a surface and then touching your mouth, eyes, nose, it’s probably not likely,” he said.

But Ann Reichle, who owns Angelina’s Pizza near Cleveland, is going to keep wiping down her restaurant every hour.

She wants people to feel safe and relaxed, and said she’ll slow down the obsessive cleaning once she sees major chain restaurants stop. 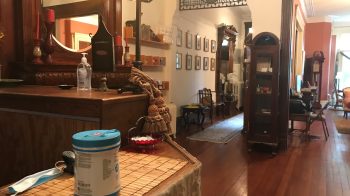