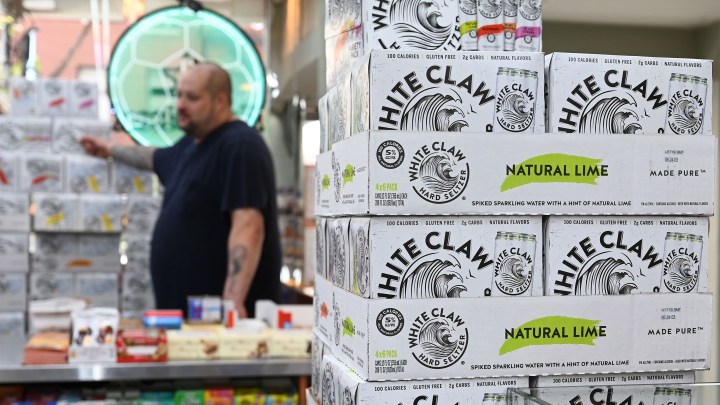 COPY
Cartons of hard seltzer White Claw are on display at the Round the Clock Deli in New York City in September. Timothy A. Clary/AFP via Getty Images

Cartons of hard seltzer White Claw are on display at the Round the Clock Deli in New York City in September. Timothy A. Clary/AFP via Getty Images
Listen Now

Boston Beer Co., the maker of Sam Adams, is expected to report strong quarterly earnings Wednesday. But it’s not the flagship beer brand that’s been driving growth for the company lately but a newer product: Truly, a line of lightly flavored, fizzy malt liquor drinks that is part of a fast-growing market for hard seltzer.

If ever there were a sign of changing times, it was during the Super Bowl — the “Super Bowl” for beer ads. But this year Budweiser used some of its precious advertising time on something new:

The beer behemoth is the latest to jump into a $2 billion hard seltzer market led by White Claw and Truly, with new brands popping up seemingly every week.

“It’s been a total phenomenon. It exploded,” said Benj Steinman, the editor of Beer Marketer’s Insights, noting the hard seltzer market grew faster in the last year than imported or craft beer ever has in any single year and shows no signs of slowing.

The clear, fizzy drinks with around 5% alcohol seem to be pulling market share mostly from light beer, said Jim Watson, a beverage industry analyst with Rabobank.

“The hard seltzers are really designed to be not very offensive, so it’s light on flavor, light on calories and carbs,” he said. And unlike beer, hard seltzer manages to pull in men and women equally.

The diversity of flavors, from mango to pear and elderflower, appeals to young consumers, said David Garfield, the global leader of consumer products practice at AlixPartners.

“Millennials are flavor seekers,” he said. “While they can be brand loyal, they like to try new products, new flavors and new ingredients.”

The ability to switch flavors as trends change, he said, could give hard seltzers more staying power than previous malt beverages like Zima, which fizzled out into a punchline.