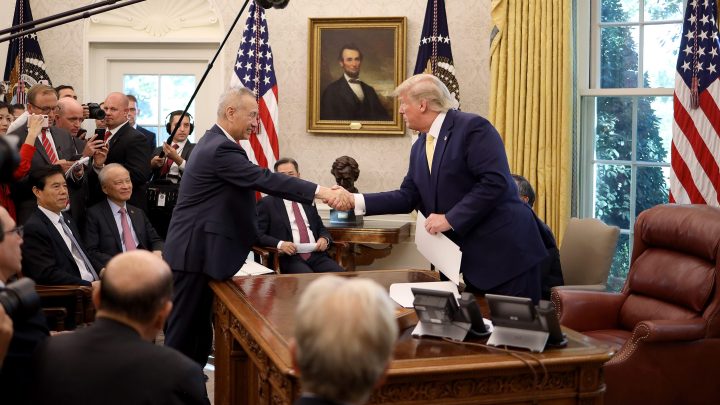 The ongoing trade saga between the U.S. and China has continued for almost two years now, with each country placing (or threatening) tariffs on billions of dollars worth in products.

Now, there’s set to be an agreement. President Donald Trump announced that he’ll sign the first phase of a trade deal on Wednesday. Tariffs on about $120 billion worth of Chinese goods will drop from 15% to 7.5%, while China has agreed to “end its long-standing practice of forcing or pressuring foreign companies to transfer their technology to Chinese companies.”

Marketplace host Kai Ryssdal wanted to know what questions you had about the trade war, which we’ve tackled below. We’ll also continue to update our FAQ with trade questions, so check back here for more answers.

What exactly is a trade war?

We’ve heard the term “trade war” tossed around constantly in the news, so Twitter user @jmasoncooper had a very valid question: he wanted to know how to actually define it.

OK, so the bad news is that there is no official definition, according to Doug Irwin, a trade historian at Dartmouth College.

“It’s not even really an official term that’s used by economists or others,” Irwin told Marketplace.

However, the way it’s used generally describes the back-and-forth between countries trying to restrict each other’s trade.

Check out the timeline below to learn more about the origins of the Trump tariffs:

What are our next steps for phase two of the trade deal, and beyond?

A couple of you, like @code_and_beer, were wondering if we have a timeline for the next phase, and how many stages we should expect. President Trump has kept details vague, at first stating that he’ll head to Beijing for talks  “at a later date,” and more recently mentioning that he may wait until after the 2020 presidential election to complete phase two.

“I think I might want to wait to finish it until after the election because I think we can make a little bit better deal, maybe a lot better deal,” Trump has told reporters.

Is this a deal or treaty that has to be approved by Congress, or can the executive branch negotiate and enact it unilaterally?

This question came from Alex Herr in Edina, Minnesota. Those of you who remember high school civics might, like Herr, be wondering why the constitution doesn’t say Congress is in charge of tariffs and trade and international commerce.

In the 1930s, Congress started slowly handing more of that power to the president. Today, the president can proceed with deals like this unless Congress expressly votes to stop him, which is unlikely.

There are still some treaties that have trade elements mixed in that do still require Congressional approval, like the US-Mexico-Canada agreement currently being hammered out. But, save a court challenge or a surprising move from Congress, Trump and his team are running this show.

Is there any historical precedent for tariffs really working as intended?

To Katherine Keena in Savannah, Georgia, who asked this question: the short answer is it depends on what you mean by “intended.” If your intention is to protect your own industries, it can work in the short term.

If you hike tariffs on imported widgets, making them more expensive, it gives domestic producers more wiggle room on prices, potentially helping them stay in business.

But most historians and economists say trade wars and tariffs don’t really help the economy. The example most folks like to point to is the Smoot-Hawley Tariff Act of 1930, which was supposed to help us out of the Great Depression.

The world is now so connected by trade, that it’s hard to tap out of the global economy altogether. But countries do still have tariffs to protect industries.

For example, even if you can get cheap steel from China, you don’t really want to let them flood the market and put domestic steel out of business. Because if China then decides to stop selling America steel, it’s a problem.

Did the U.S. win the trade war and was it easy?

Trump notably commented that “trade wars are good, and easy to win,” which had @willrogers013 wondering if we actually did end up emerging victorious. We didn’t, because of the simple conclusion that no one wins trade wars, according to Monica de Bolle, a senior fellow at the Petersen Institute for International Economics.

When economists have examined the economic effects of trade wars, they’ve found evidence of lost jobs and stifled economic growth.

How has trade changed between the U.S. and China since the start of the conflict?

Twitter user @Johannes356 wanted to know the dollar amount in trade between the U.S. and China back in 2016 and how it compares to where we are now, along with tariff rates and annual agricultural numbers.

Trump has repeatedly criticized the trade deficit between the U.S. and China, saying that America has been “losing to China for many years,” and that “we’ve given them so much.”

Here’s a disclaimer, though, from Hamid Mohtadi, a professor at the University of Wisconsin at Milwaukee: “A trade deficit or surplus itself is really not an important indicator of the health of an economy.”

And other economists have told Marketplace a trade deficit isn’t always good or bad — it depends. While other countries might not be buying our goods, they might be investing in the U.S. through our financial markets and real estate.

Here’s where the numbers get more revealing about our trade situation. “That itself is not a good thing because of our [agricultural] economy,” Mohtadi said.

To compensate for farmers’ losses, the Trump administration created a program that doles out subsidies to producers who have been hit by China’s retaliatory tariffs. Some of those farmers revealed to Marketplace how much they’re struggling because of the trade war.

What third-party country has benefited the most while this saga has played on, and where did China sign otherwise unexpected deals?

China didn’t really need to sign a bunch of new trade deals. The country’s businesses just sold their stuff elsewhere to make up for the drop in U.S. sales, and bought more from other suppliers instead of the U.S.

On the export side, Chinese companies sold more to Europe — exports were up almost 10% to the U.K., and there was an even bigger increase in exports to other Asian countries.

On the import side, the Asia-focused financial services group Nomura dug into this and pointed to the windfall that came to countries like Chile, Malaysia and Argentina due to a surge in demand for agricultural goods China used to buy from the U.S.

Brazil, for example, sent a record amount of soybeans to China in 2018 at the expense of American farmers. Vietnam was the biggest winner, though, picking up business from companies shifting supply chains out of China.

Did the trade war have significant long-term impact on global supply chains?

Kevin Peaslee in Salt Lake City wanted to know if businesses have permanently shifted manufacturing locations, changed suppliers, or altered how they operate.

Companies have definitely changed the way they do business around the world because of the trade war. The supply chain management firm QIMA had a recent report out showing about a 14% drop in U.S companies sourcing goods from China, working instead with countries like India and Vietnam.

But whether your global supply chain really changed depended on whether it could — companies like Nike complained that you can’t just up and move a sneaker factory at a moment’s notice. If you’re making something like plastic spoons, on the other hand, you can kind of make those anywhere without much trouble.

One place most of those shifting supply chains didn’t go was the United States — many of the low-skill manufacturing jobs just aren’t coming back.

This trade war has taught a lot of businesses that it’s not a great idea to have a big chunk of your supply chain tied to just one place.