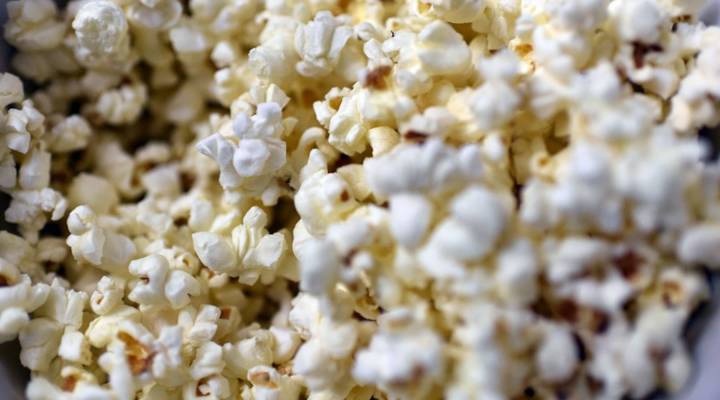 Here’s a question for you: What does the ongoing trade dispute between the United States and China have to do with a night at the movies? The answer? Your trusty cinematic companion, popcorn.

In the same way American soybean and hog farmers are feeling the strain of international trade tensions with China, so are American popcorn producers, who exported 313 million pounds of popcorn in 2017 — 30% of the year’s crop, according to the Popcorn Board, a nonprofit founded by the U.S. Department of Agriculture, which is comprised of American popcorn growers and distributors.

Farmers are filled with uncertainty by the trade war. There’s been no resolution to trade tensions between the United States and China, though the two countries have agreed to set up enforcement offices to police any agreement they come to. In addition, the United States-Mexico-Canada trade agreement has not been ratified. The lack of a trade agreement leaves farmers caught between retaliatory tariffs and a hard place.

For the popcorn industry, that’s meant a drop in sales. Industrywide, exports of popcorn were down nearly 25% during the third quarter of 2018, according to Norm Krug, CEO of Preferred Popcorn and a member of the Popcorn Board.

Popcorn is a different variety of corn than the sweet corn that’s eaten on the cob or made into animal feed. But it’s all the same where tariffs are concerned. All forms of corn were part of the tariffs imposed by China on $110 billion worth of American products in 2018.

Krug remembers the first sale his company made in 1998.

Preferred Popcorn, a small entity then, had trouble selling popcorn not only in its home base of  Nebraska, but throughout the United States. Much of the domestic popcorn industry is dominated by giants like packaged-foods producer Conagra, which forced smaller companies, like Preferred Popcorn in the late ’90s, to get creative with their business plans. It was in Jakarta, Indonesia, Krug explained, where his company found a level playing field and secured its first shipment of popcorn.

“It was an act of survival,” Krug remembers. “We did it out of necessity.”

For Preferred Popcorn, a focus on international markets worked. Today, the company is one of the largest popcorn producers in the United States, selling about 200 million pounds of popcorn domestically and internationally every year.

International sales account for about half of Preferred Popcorn’s total business — it sells and ships bulk popcorn to over 70 countries. China and Mexico are the top purchasers.

“American farmers can compete with anybody in the world, as long as we have a level playing field,” Krug said. “But the one thing we can’t do is compete against government,” he said, referring to tariffs.

Since the tariffs were introduced in 2018, Krug’s company has seen a 30% drop in sales to China. And although Preferred Popcorn is still selling in markets where tariffs are in place, Krug estimates sales will continue to decline because retaliatory tariffs make “it difficult for our customers to afford U.S. products.”

Popcorn growers have another concern. As the trade dispute continues, growers like Krug wonder if they’ll have international trading partners to return to once the dust settles.

Chad Hart, a professor of economics at Iowa State University, argued that the longer tariffs are in place, the more Chinese companies might want to do business with Argentine or Brazilian companies.

Two other indicators, net farm income and commodity prices, illustrate the struggles American farmers are currently facing, according to Wesley Peterson, professor of agriculture at the University of Nebraska-Lincoln.

Net farm income, the USDA’s tabulation of the money made by American farmers minus operation costs, was forecast to be down in 2018 by over $9 billion, or 12%. Commodity prices for farm products have been falling, according to USDA chief economist Robert C. Johansson. Overall, the Congressional Research Service predicts that the U.S.-China trade dispute is “expected to shift trade patterns and diminish U.S. export prospects in 2019.”

But, as Peterson explained, these indicators aren’t the total picture. U.S. farms were already facing challenges, and the trade war has only added to them. The trade war, he said, has disrupted international markets, and it’ll take time to see the full impact on the U.S. agricultural industry.

“It’s a difficult time for American agriculture, and we’re all watching closely as these trade agreements get negotiated,” Preferred Popcorn’s Krug said. “We are ready to produce food, and ready to help feed the world.”