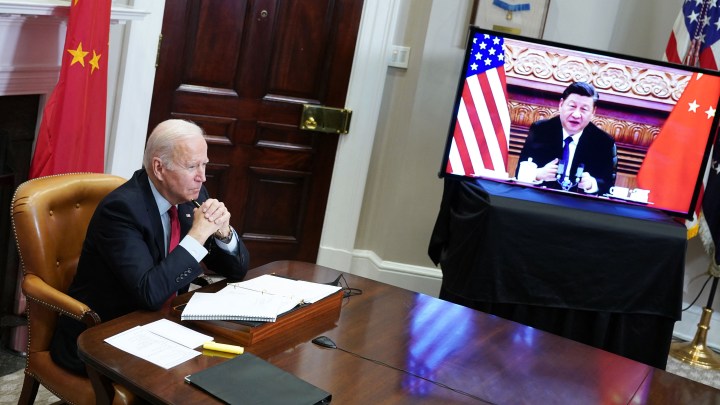 The topic of trade came up in Monday night’s virtual meeting between President Joe Biden and Chinese President Xi Jinping. Specifically, the White House said President Biden underscored the importance of China keeping its commitments to buy billions of dollars’ worth of U.S. goods and services by the end of this year.

China has promised to buy more U.S. agricultural products like soybeans and manufactured goods like planes. Plus resources like natural gas, oil and coal. This is all part of the phase one deal, a trade agreement that China signed last year with the Donald Trump administration.

So how’s that going?

The trade deal is 80% goods and 20% services, he said. And China’s on the hook to buy more than $350 billion worth of American products.

That could be because the goals for Chinese purchases set by the Trump administration were unrealistic. That’s what Jennifer Hillman thinks. She’s a former U.S. trade negotiator now at the Council on Foreign Relations. For example, Hillman said the agreement requires China to boost its imports of natural gas from the U.S. by more than 400%.

“We did not have the capacity or the ability to increase shipments up to the level that was set forth in this phase one agreement,” she said.

Another problem, Hillman said, is that there are still Chinese tariffs on some of the American products Beijing is supposed to buy, making them pricier. As far as the U.S. services China committed to using, the pandemic has gotten in the way.

The Biden administration should just give Beijing more time to reach the targets in the trade agreement, Cutler said — and shouldn’t risk another trade war by raising tariffs on Chinese products.