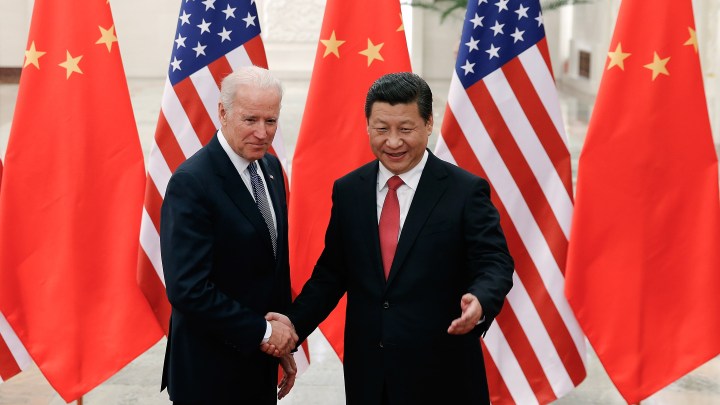 President-elect Joe Biden will be inheriting a difficult trade relationship with China. The fundamental economic tensions between the U.S. and China are alive and well.

“I have heard some pretty amazing stories,” said Nicole Bivens Collinson, president of international trade and government relations at Sandler, Travis & Rosenberg, PA. Among her clients as a trade lawyer are U.S. companies that do business in China. She recalled one of them, a manufacturer.

“When they tried to invest, they were promised they would have great access to the Chinese market, eventually,” but they were required to work with a Chinese partner.  And there was another catch. “They were told, however, that when they initially invested that 90% of the goods must be exported. So that’s what they did. They began manufacturing exporting 90% of the goods,” under the impression that eventually they could sell into China.

“Meanwhile, their technology — the entire factory, almost to a T, was replicated literally across the street,” Bivens Collinson said.

The Chinese partner copied and pasted the technology and the factory and started selling into the Chinese market themselves. “The Chinese entity then garnered the market in China with those products that had all the same technology from the U.S. company that had invested.”

Bivens Collinson has lots of stories like this. One company needed to hire a linguist in China to catch industrial spies trying to infiltrate the company.  They aren’t quite sure if the espionage was private or directed by the government. Another company’s trademark and branding was altogether ripped off.

Some of those more clear-cut intellectual property conflicts have dissipated as the legal environment has improved over the years, Bivens Collinson said, though she wonders whether the situation has improved “because they’ve gotten most of what they need at this point.”

U.S. companies also complain about the limitations on investment in China.

“The U.S. is primarily a services economy, and it’s hard to export services if you can’t invest,” he said.

So while Chinese goods have been entering the U.S. for decades, U.S. services in some industries can’t get into China.

“For example, think of health care. We have a lot of health care providers who want to invest in China, selling American-based services into China, but that’s a pretty restricted sector,” he said.

All of these complaints, though, are just symptoms of a larger, more fundamental economic dispute between the U.S. and China that the Biden administration is inheriting wholesale.

“The underlying problem we have had all along is the increasing role of the state and the Communist Party in running everything in China,” said Jennifer Hillman, senior fellow at the Council on Foreign Relations.

State-owned enterprises — businesses owned by the Chinese government — account for 30% of China’s GDP, Dollar estimates. The size of these companies and their artificial support distort markets and competition well outside of China’s borders, Hillman said. Even private companies, like telecom giant Huawei, have benefited from government support.

In previous decades, for example, China overproduced steel and flooded international markets, undercutting production in other countries. The fear is that the same thing will happen with, say, semiconductors.

“So it’s getting harder and harder for any companies to compete with these huge, wholly state-owned, wholly financed by the Chinese government, heavily subsidized companies that do not have to turn a profit and will not go bankrupt no matter what happens to them,” Hillman said. The government is exercising increasing control over businesses in China, she said. “Even for foreign-invested ventures in China, they have to have a member of the Communist Party sitting on the board of the corporation. And what they are finding is that there may be only one Communist Party member on the board, but if other board members do not vote the way that member votes, then the company doesn’t get a license, a permit, etc.”

Biden will inherit the phase one trade deal between the U.S. and China that was signed in January. It did not touch these structural concerns.

The deal did make some improvements. For example, it opened up U.S. financial companies’ access to China, though this was something China’s economy needed. Doug Barry, senior director of communications and publications for the US-China Business Council, said companies have felt the difference. “A number of our businesses, including insurance companies, banks, financial managers of one kind or another, have gone in and found that conditions are excellent.”

It’s gotten easier to export agricultural goods to China, including genetically modified crops, Barry said. But he was quick to point out the other massive issue Biden will inherit: tariffs on $350 billion worth of Chinese goods as well as retaliatory tariffs on more than half of what the U.S. sells into China.

All that, in sum, is what President-elect Biden will inherit. A fraught relationship between two economic superpowers. A little bit of progress, a whole lot of tariffs and the same big problems the U.S. was facing with China four years ago.