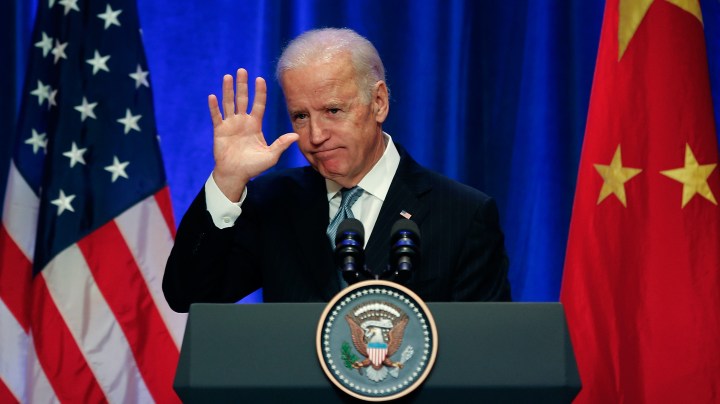 In January of last year, in the Before Times, the Trump administration was cutting a trade deal with China to perhaps retreat from the trade war and tariffs on half a trillion dollars’ worth of goods from China, and going to China.

So what’s up with that trade war now?

Over the weekend, the Biden administration’s new U.S. trade representative, Katherine Tai, said all American tariffs will stay in place. At least for the time being.

That’s even as the trade war hurts American exporters and their workers.

Keeping tariffs on Chinese imports shows that the White House will challenge Beijing when it needs to, according to Scott Paul at the Alliance for American Manufacturing, a group that lobbies for “Buy America” policies. Paul said this fits into the Biden plan of boosting domestic supply chains in several sectors.

“They start with semiconductors, where there’s been this global shortage, strategic minerals and batteries necessary to power a clean energy economy,” he said.

The overall strategy on China is still in formation. But already, the two-way trade war has cost American exporters 300,000 U.S. jobs, according to Moody’s Analytics.

Despite keeping the tariffs in place, the administration is trying to find areas where it can cooperate with China. For instance, climate, said Cheng Li at the Brookings Institution. “It’s not a secret that Biden will invite world leaders for the climate summit next month. So I think [Chinese President] Xi Jinping will be invited. There’s a possibility that both leaders will hold a side meeting.”

He said maintaining the tariffs gives the U.S. bargaining leverage with China.