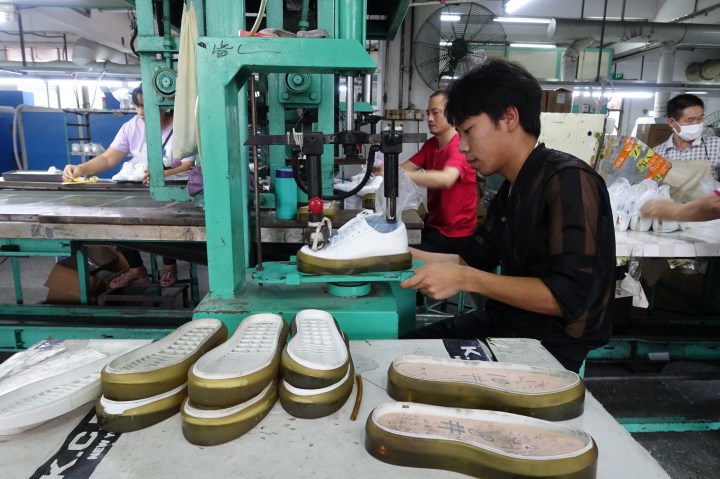 COPY
Changjian Shoe factory has moved much of its shoe production for the U.S. market from China to other countries in Southeast Asia in order to avoid U.S. tariffs on Chinese goods. Charles Zhang/Marketplace
Elections 2020

Changjian Shoe factory has moved much of its shoe production for the U.S. market from China to other countries in Southeast Asia in order to avoid U.S. tariffs on Chinese goods. Charles Zhang/Marketplace
Listen Now

More than a year ago, every pair of shoes coming off the sewing machines at the Changjian factory in southern China were sent to America.

Once Chinese shoes were subject to an extra U.S. tariff because of the ongoing U.S.-China trade war, Changjian’s owner, Tony Tung, shifted manufacturing to the company’s other factories.

“Most of our production has moved out of China to Cambodia and Vietnam,” Tung said.

When Chinese manufacturers were hit by the pandemic economy, they had already been dealing with U.S. tariffs on billions of dollars’ worth of their exports. The Trump administration accuses China of playing unfair, which Chinese officials deny. There is no indication that President-elect Joe Biden will unravel the additional tariffs soon.

“I lost my biggest client in the U.S. because of the uncertainty of tariffs.”

To avoid the U.S. tariffs and rising labor costs in China, some manufacturers, like Tung, have moved their production to low-cost countries in Southeast Asia, although this is an expensive option.

Exporters who could only afford to remain in China sometimes split the cost of the tariffs with American importers to retain their business.

Other exporters make it worthwhile for Americans to pay for the extra tariffs by upgrading their products or services.

“Clients can upload diagrams of what customized parts they want. Our online system quotes them a price almost right away,” Xmake’s foreign sales manager, Claudia Zhou, said. “The whole ordering process can be done in a day … rather than a week.”

Zhou is among those in the manufacturing industry who feel that the U.S. policy towards China has been at its lowest point under President Donald Trump.

“Trump’s policy may well continue in the administration of a new president, but it won’t get worse,” she said.

Exporters not subject to American tariffs are also revising their business plans.

Initially, the U.S. trade representative wanted to place additional duties on medical syringes and then decided against it. That still made medical equipment supplier Miao Liping lose business.

“I lost my biggest client in the U.S. [to a South Korean supplier] because of the uncertainty over tariffs,” he said.

Miao said he doesn’t ever want to rely totally on the U.S market.

“We have switched our focus to Europe and the domestic Chinese market because of the impact of the U.S. China trade war,” he said.

It is a business plan that he won’t reverse even with a new president entering the White House in January. Miao said he expects that U.S.-China relations will remain tense.