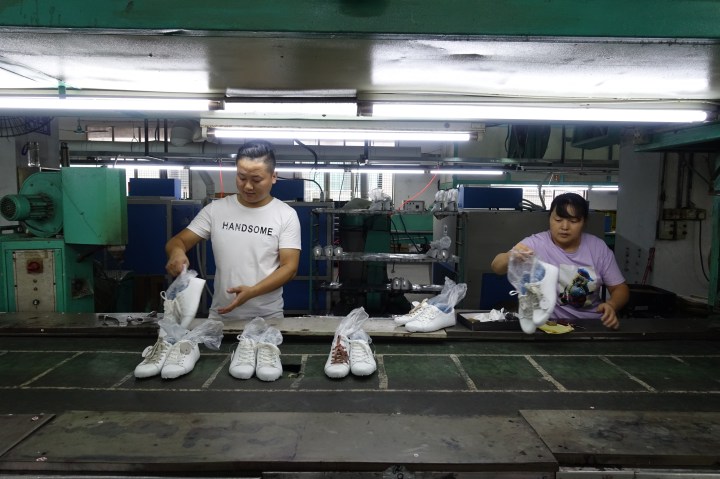 Communist China had a lot to celebrate on Oct. 1, its 70th birthday. The country has gone from one of the poorest in the world to having the second-largest economy.

President Donald Trump has suggested that China achieved this by engaging in unfair trade practices and vowed last year that he would not allow America to be “ripped off” by China any longer.

Trump has imposed tariffs on billions of dollars of Chinese goods, including certain types of shoes.

“Marketplace” spoke to shoe manufacturers in the southern Chinese city of Dongguan. Their answers have been edited for grammar, style and brevity.

Years in the shoe manufacturing industry: 30

Percentage of the business to the U.S. market: 85%

Years in the shoe manufacturing industry: 20

Percentage of the business to the U.S. market: 60%

Years in the shoe manufacturing industry: 30-plus

Percentage of the business to the U.S. market: 100%

How did you get your start in the industry?

Hsueh: I have a civil engineering degree from Taiwan. My uncle had been in the shoe industry for more than a decade and he wanted to start his trading company. I joined him and after about four years I didn’t want to leave the industry. I found the job challenging and I never felt bored. In 2007, I opened my own shoe factory in mainland China’s central Henan province. We also keep a smaller plant in the southern city of Dongguan.

Wen: My university major in mainland China was in Chinese language and literature. I could have worked as a teacher, but back then the salary in southwestern China’s Chongqing city, where I’m from, was only 300 yuan ($42) per month. A regular worker in southern Guangdong province made three times more. So I went to Guangdong province after I graduated in 1999. The job hunt wasn’t easy, but eventually I took a job as a management trainee at a Taiwanese shoe factory in Shenzhen city.

Tung: After I left the army in Taiwan, I was making shoe components, like soles. In 1985, I established my own shoe factory in Taiwan with 100 workers and we produced for small American brands.

Shoe manufacturing shifted from Europe and the U.S., to Japan and Brazil, then to South Korea and Taiwan. How did it move to mainland China?

Hsueh: In the early 1990s, shoe factories in Taiwan started to have labor problems. Young workers had less interest in factory jobs and wages increased. Meanwhile, mainland China started to open its economy and it became Taiwan’s biggest competitor. One company moved its production to mainland China, at first, and more companies followed.

Tung: In 1985, the average workers’ salary in Taiwan was about $800 per month. The profit margin was very low, but it was hard for me to leave and find a new industry. Some friends suggested that I visit mainland China’s Dongguan city, which only had a couple of shoe factories at that point. I arrived in Dongguan in 1989. All I said was that I planned to open a factory. So many workers scrambled to get in that they nearly broke the door down. I started my Dongguan factory in 1990, and the industry at the time was paying workers 200 yuan ($28) per month. Our monthly salary started slightly higher, at 300 yuan ($42).

Why are shoe factories shifting out of mainland China now?

Hsueh: In 2008, China had a new labor law, which increased the cost to hire workers. At the same time, there was a labor shortage. Due to China’s one-child policy [from 1979 to 2015], a lot of Chinese parents wanted their children to get more education. Young people with a bachelor’s degree didn’t want to work in factories. That’s why the shoemaking industry started to shift to Southeast Asia, or to other cheaper areas within mainland China, which is what I did. In 2008, I opened a shoe factory with a few friends in central Henan province, where the costs are still lower than along the Chinese east coast. We only maintain a small operation in expensive Dongguan. That is why we can survive.

Tung: After the financial crisis in 2008, the orders started to dry up. Some shoe manufacturers moved their businesses to other countries, like Indonesia, Bangladesh, Myanmar, Vietnam, Cambodia or India. I already have a shoe production line in Vietnam. I started it in 1998 at the request of my clients to diversify my production bases, but that operation remains small.

What are the biggest challenges to run a shoe factory?

Hsueh: To make a pair of shoes, start to finish, will require between 40 and 100-plus workers. It is hard to manage people and we must be very careful to prevent mistakes at every stage of production. Another big challenge we face is the requirement to abide by China’s environmental policies. We cannot avoid using glue and chemicals in the shoe-making process, but the government has strict regulations on these now. We stayed in our previous factory for more than six years, but the building didn’t meet some of the government’s environmental protection standards, so we had to move to our current location.

Wen: Labor costs have increased rapidly. In 2012, the average monthly salary was 3,500 yuan ($490), but now it has increased by 43% to more than 5,000 yuan ($699). Plus, we have too much competition. It is a buyers’ market. I is hard for us to increase the price. In fact, the prices we charge haven’t changed since 2014 because we know the end consumers, like in the U.S., won’t pay more. There is also increased government checks on factories to make sure they are following environmental protection standards. Environmental protection is a good thing, but I wish the government would enforce the rules more gradually.

Tung: The biggest challenge for us is that we manufacture for other brands, so we can be easily replaced by manufacturers from other countries. I am also under a lot of pressure to keep prices low, so that we keep our factories and workers busy. Sometimes, the profit margins are lower than 5%.

Kevin Tung: The orders are getting smaller. Our customers are becoming very conservative. They don’t want to stock large quantities of shoes. In the past, clients would buy 10,000 pairs in one style. Now, they might still order 10,000 pairs, but they split the order into five styles because they are not sure which ones will sell. I think this is the result of fast fashion.

What are your fixed costs and profit margins?

President Donald Trump has imposed tariffs on some types of shoes and has threatened to impose more duties on remaining footwear in December. What are your long term plans?

Hsueh: We have been upgrading our operations to serve higher-end clients to get better profit margins. We are also trying to shift some of our business towards the European market and automate production. Lastly, we’ve designed our own brand of lightweight sneakers, called Fessura.

Wen: I am trying to explore European and Japanese markets as well as the possibility of automating my shoe production.

Tung: Trade talks go up and down. Nobody can predict the results. No matter what, we will use mainland China as our base for research and development.

As China marks its 70th birthday, do you feel like a winner?

Hsueh: I don’t think there is a winner or a loser in trade, everyone just takes what they need. China has sufficient labor, so it can provide cheap products for the consumers in the world. At the supply end, China is the winner, but at the demand end, the U.S. is the winner. It is mutually beneficial. As for me, personally, I’m still in the industry, so it is too early to say whether I am a winner or a loser.

Wen: There have been so many ups and downs. It’s not easy to run a business. I am an entrepreneur, and I am not a winner, yet, because I haven’t realized my dreams to become the best work boot factory in the world.

Tung: I don’t think I am a winner. I moved some production to Southeast Asia, but the cost over there is rising as well. So, I am not a winner. China can’t leave the U.S., the U.S. can’t leave China. They are like conjoined twins, you can’t separate the two.