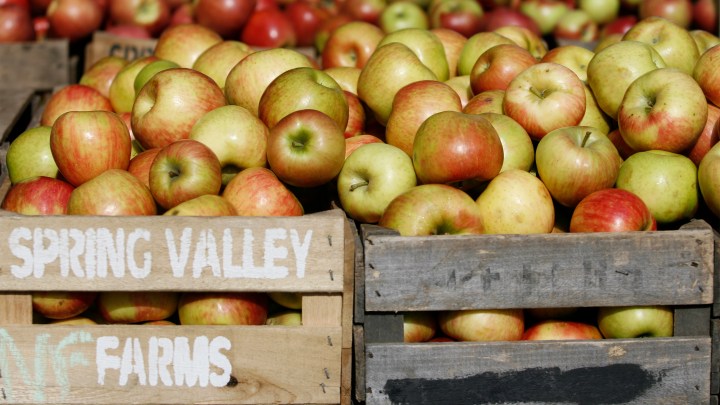 COPY
Apples are one crop that have been hit by the trade war. Above, apples produced by Spring Valley Farm and Orchard in West Virginia are on display at a farmers market. Kimihiro Hoshino/AFP via Getty Images
Trade showdown

Apples are one crop that have been hit by the trade war. Above, apples produced by Spring Valley Farm and Orchard in West Virginia are on display at a farmers market. Kimihiro Hoshino/AFP via Getty Images
Listen Now

The Bureau of Economic Analysis reported Tuesday that the U.S. international trade deficit fell $2.6 billion (4.7%) in September, to $52.5 billion. The trade deficit was $55 billion in August. Tariffs, trade tensions, the slowing global economy all factor into the decline. Exports and imports both fell, but imports fell more (down 1.7%) than exports (down 0.9%), leading to the trade deficit’s monthly decline.

“The Chinese New Year is everything,” Bair said. “For example, if I was coming to visit you, I would bring you this perfect apple from the United States as a gesture of good health and prosperity for the coming year.”

Bair said consumers in China and India have taken to U.S.-grown red delicious apples, and sales of that variety have soared in the past several years. But in the escalating trade war, the U.S. has slapped tariffs on Indian and Chinese imports, and those countries retaliated with tariffs of between 60% and 70% tariffs on U.S. apples.

“We are going to have our ninth-largest crop in history,” said Bair, citing data from USDA. “But at the same time, exports are down about one-third, close to $200 million, which, frankly, is a lot for the apple growers.”

Another category that’s highly susceptible to tariffs is agricultural equipment, mining gear and the like. Sales to foreign customers by major American manufacturers such as Caterpillar and John Deere are falling, according to CFRA equity analyst Elizabeth Vermillion.

“Now you have tariffs and trade,” said Vermillion, “and slowing global macroeconomic headwinds.”

Vermillion said that increasing uncertainty for U.S. farmers about the future of tariffs and global trade relations — will China buy their soybeans, or India buy their apples? — is leading them to hold back on buying new farm equipment for next year.

Economist Mary Lovely at Syracuse University said the increasing weakness of both U.S. manufacturing and agriculture is hurting some regions more than others.

“We’re seeing the slowdown hit the Midwest, the farm belt,” said Lovely. “And a big slowdown in business investment, capital equipment purchases, is hitting states like Pennsylvania and Illinois.”

One trend evident in the data since early 2019 is a significant increase in the U.S. trade deficit with China. Andrew Hunter, a senior economist at Capital Economics, said that’s not very surprising.

“Early on, President Trump argued that the U.S. was in a strong position, given that the U.S. had a significant trade deficit with China, so China theoretically had the most to lose in terms of exports,” said Hunter.

“But what we’ve seen over the past 12 to 18 months is that the Chinese state has far greater powers to control directly what Chinese firms are purchasing from the U.S.

“President Trump can put tariffs on Chinese goods,” said Hunter, “but he can’t order U.S. customers to stop purchasing them. In China, we’ve seen purchases of agricultural products and energy goods almost completely stop, just because firms were ordered to stop buying from the U.S.”