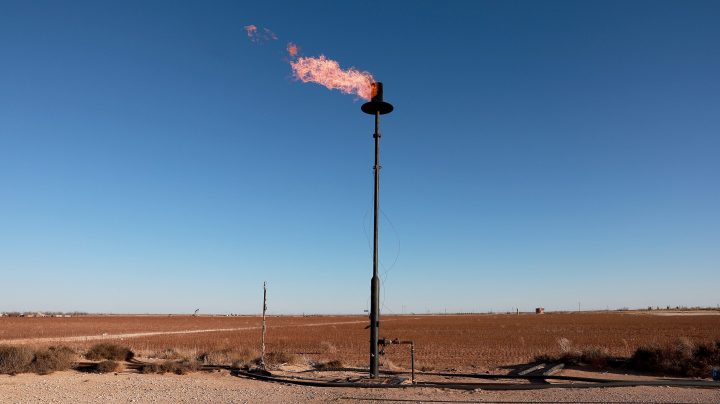 COPY
U.S. exports have jumped, partially due to an uptick in demand for liquefied natural gas in Europe. Joe Raedle/Getty Images

U.S. exports have jumped, partially due to an uptick in demand for liquefied natural gas in Europe. Joe Raedle/Getty Images
Listen Now

The trade deficit fell in June by more than 6%, the Commerce Department reported Thursday. Part of that is because imports fell slightly. That’s likely because consumers haven’t been buying as much stuff this year.

But a big reason why the trade gap narrowed in June is because U.S. exports rose, hitting a record high $260.8 billion. And a big part of those exports? Liquefied natural gas sent to Europe.

Russia’s invasion of Ukraine has forced Europe to look for alternatives to Russian gas, said economist Philip Verleger at the Niskanen Center.

“The U.S. happened to be constructing new LNG facilities across the Gulf [of Mexico], and Europe is going to buy as much as they can,” Verleger said.

Russia’s invasion is also causing countries in Europe, the Middle East and North Africa to look for alternatives to Ukrainian wheat and corn.

“So the United States was able to see some export business pickup,” said Naomi Blohm at Total Farm Marketing.

She said the U.S. has plenty of grain. Parts of Iowa, Indiana and Illinois have had decent rain this year, and Blohm said the U.S. is well-equipped to export that grain too.

The U.S. isn’t just exporting more goods, it’s services too, like travel. And that spending can count as an export, said Teresa Fort, a professor at Dartmouth College.

“And so some of the service exports we see are likely tourists coming into the United States, right, and consuming services here,” Fort said.

And Fort said the boost in exports of goods and services is happening while the U.S. dollar is strong, making American exports more expensive. If that wasn’t the case, exports might be even higher, she said.