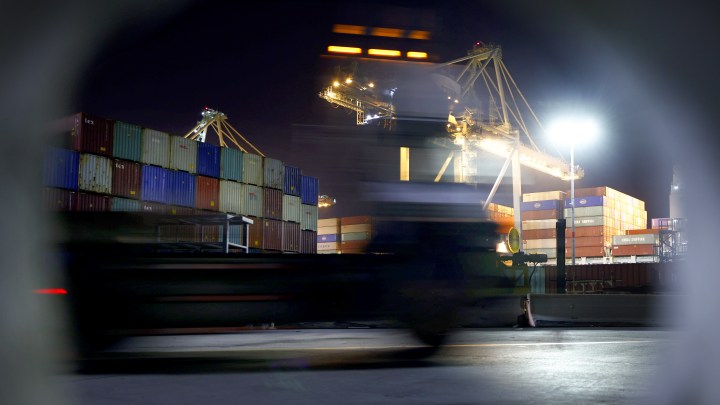 U.S. manufacturers are stepping in to meet global demand as other countries may just be starting to reactivate their industries. Above, a truck passes shipping containers at the Port of Los Angeles. Mario Tama via Getty Images

U.S. manufacturers are stepping in to meet global demand as other countries may just be starting to reactivate their industries. Above, a truck passes shipping containers at the Port of Los Angeles. Mario Tama via Getty Images

Take October’s jump in U.S. exports, for example. They were $16.8 billion higher than in September, a rise of about 8%. And that brought the U.S. trade deficit down by 17.6%.

“It’s significant, but I don’t think people should get too excited about it because there’s enormous amounts of monthly variation in these numbers,” said Mary Lovely, a senior fellow at the Peterson Institute for International Economics.

In this case, Hurricane Ida held back oil and gas exports in September, so there was a big backlog that rushed out in October. That said, some of the rise in exports signals that the rest of the world is catching up to the United States in the economic recovery and buying more of our stuff.

“U.S. factories are open, and they’re available to meet the demand that’s coming from abroad, where other countries are also beginning to recover,” Lovely said.

“And then we know from the manufacturers themselves that they did more to reopen plants in November as well, so we know we probably worked through the worst of the disruption caused by the shortage of semiconductors,” he said.

But imports didn’t move much in October — up 1%. Rising imports are usually a good sign, according to Flexport Chief Economist Phil Levy, but right now it spells trouble.

Remains, he said, and probably will remain for a while longer.