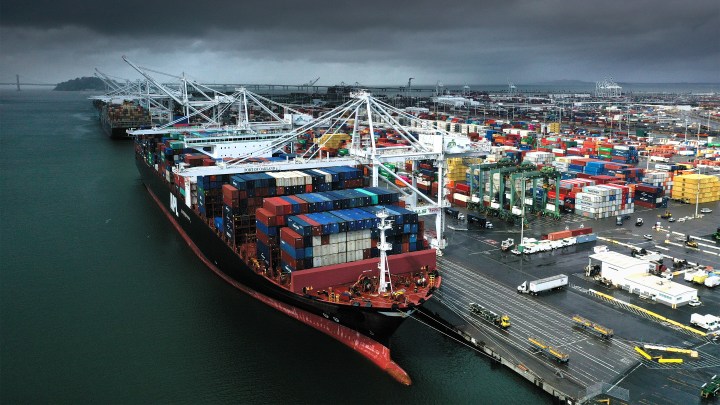 COPY
Container ships are docked at the Port of Oakland on March 06, 2019 in California. Justin Sullivan/Getty Images

Container ships are docked at the Port of Oakland on March 06, 2019 in California. Justin Sullivan/Getty Images
Listen Now

The U.S. deficit with global trading partners expanded in March, increasing 1.5 % to about $50 billion. At the same time, the U.S. deficit with China, whose trade representatives are in the U.S. to try to work out a deal, narrowed further as U.S. farmers exported more soybeans.

The overall deficit getting bigger isn’t necessarily a bad thing, said Dan Ikenson, director of the Herbert A. Stiefel Center for Trade Policy Studies at the Cato Institute.

“It just so happens that when the economy grows, we tend to see the trade deficit increase,” he said.

The trade numbers also give us a snapshot of what’s happening on the export side of things. For example, American companies shipped fewer aircraft internationally in March, around the same time problems with Boeing’s 737 Max became known.

“This could be a continuing drag on U.S. exports moving forward, said Mary Lovely, economics professor at Syracuse University. “Boeing is one of our largest exporters. The company is very important to the overall health of our trade balance.”

Agricultural exports have taken a beating in the trade war. But soybean exports to China were up nearly 40% in March. “That’s in part due to the agreement where China would begin to start up with some purchases of soybeans,” said Lovely.

Whether that boost will last depends a lot on what happens with ongoing trade talks between Washington and Beijing, Lovely said.