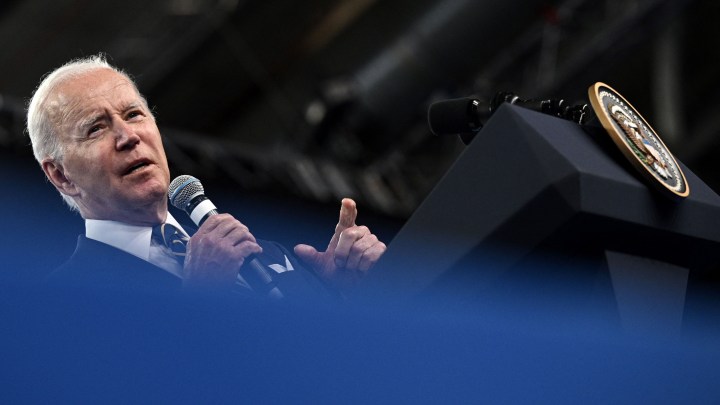 COPY
President Biden could reportedly make a decision about rolling back tariffs on some Chinese goods as soon as this week. In his Cabinet, opinions on the issue differ. Brendan Smialowski/AFP via Getty Images

President Biden could reportedly make a decision about rolling back tariffs on some Chinese goods as soon as this week. In his Cabinet, opinions on the issue differ. Brendan Smialowski/AFP via Getty Images
Listen Now

President Joe Biden is reportedly considering rolling back tariffs on some Chinese goods and could make a decision as soon as this week.

​He’s being pulled in opposite directions on the issue by two members of his Cabinet. Treasury Secretary Janet Yellen has argued that the Trump-era tariffs are a drag on the economy, while U.S. Trade Representative Katherine Tai wants to use the tariffs as leverage in trade talks to convince Beijing to change its ways.

Now, a reminder about why the U.S. — under President Donald Trump — imposed tariffs on China in the first place. The point was to create leverage, said Georgetown Law’s Jennifer Hillman, “to try to have a negotiation with China to address the things that were at issue in the very beginning.”

Namely, allegations of unfair trade practices and the theft of intellectual property.

“My concern is that it seems like the tariffs have stayed on, but there isn’t much in the way of ongoing conversations or negotiations happening right now with China,” Hillman said.

Tariffs remain in place on a range of Chinese imports, from components used in manufacturing to consumer goods like toys and clothing.

The latter group is where Hillman said the Biden administration should consider removing tariffs — if China removes its own, which it imposed in retaliation.

Would consumers notice? No, per Derek Scissors of the conservative American Enterprise Institute. “Inflation is being driven by gas, food and housing, none of which are going to be affected by the tariffs.”

But lifting some tariffs could start to change public perceptions of inflation, said Gary Hufbauer of the Peterson Institute for International Economics.

“Would it be eye popping? No, we’re not claiming that. It would be just something in the direction of tangibly reducing inflationary pressures in the U.S. economy,” he said.

Presidents don’t have a lot of power to control inflation, Hufbauer said. But this is one lever the administration can pull right now.