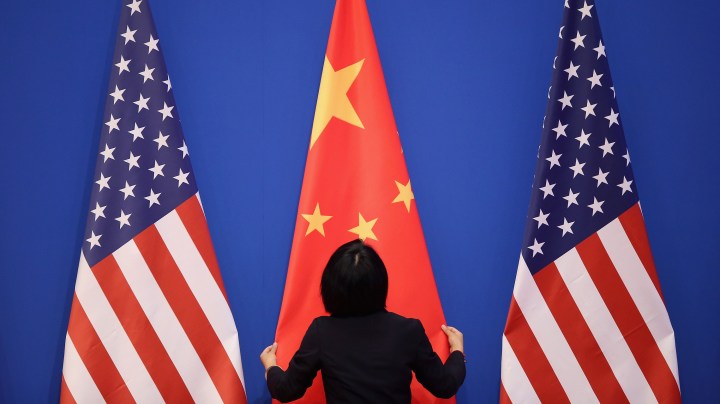 COPY
U.S. Trade Representative Katherine Tai outlined the importance of building U.S. competitiveness while speaking at the Center for Strategic and International Studies. Above, a woman adjusts the Chinese flag at Beijing's Diaoyutai State Guest House in 2014. Feng Li via Getty Images

U.S. Trade Representative Katherine Tai outlined the importance of building U.S. competitiveness while speaking at the Center for Strategic and International Studies. Above, a woman adjusts the Chinese flag at Beijing's Diaoyutai State Guest House in 2014. Feng Li via Getty Images
Listen Now

The U.S.-China trade relationship is still a very fraught one. China generously supports many of its own industries while putting up barriers to some U.S. industries; meanwhile, the United States and China continue to apply tariffs on $410 billion worth of each other’s goods every year.

On Monday, U.S. Trade Representative Katherine Tai laid out how the Biden administration plans to approach this relationship. Tai told an audience at the Center for Strategic and International Studies that the root of U.S.-China trade tensions was still very much in place.

“In recent years, Beijing has doubled down on its state-centered economic system,” she said. “It is increasingly clear that China’s plans do not include meaningful reforms to address the concerns that have been shared by the United States and many other countries.”

The next step, Tai said, is to press China to stick to the agreements it made under the Trump administration to, among other things, buy more U.S. goods. But she acknowledged that doesn’t really deal with the main economic beef between the two countries: how China heavily subsidizes some industries, undermining foreign competitors.

“The Biden administration doesn’t think there’s that much to be gained in the short term with negotiations with China,” he said.

Tai did say that given how much China pours into its own infrastructure and domestic industries, the Biden administration’s focus is building competitiveness here in the U.S., specifically through building U.S. infrastructure and worker training currently being considered in Congress. Tai also said the U.S. needs to work with allies to address concerns with China, but offered few details.

“I don’t think we gained a lot of clarity on what U.S. engagement with China is gonna look like in the long run, unfortunately,” said Mary Lovely with the Peterson Institute for International Economics.

That may be, in part, because so much about the U.S.-China relationship is so unpredictable.