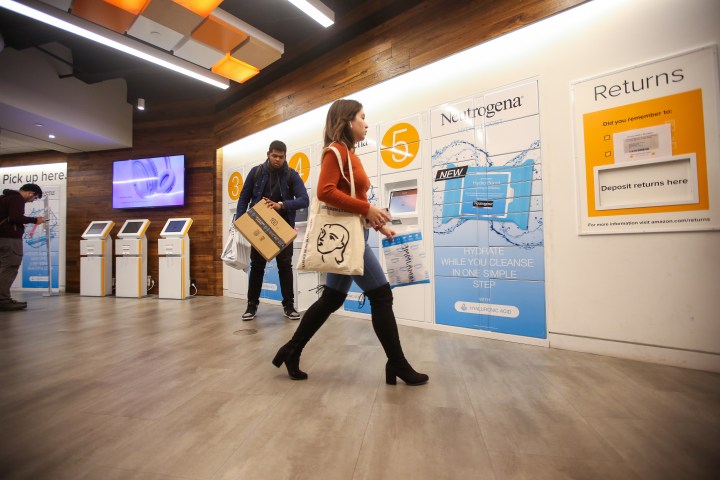 COPY
A new Amazon hub on the University of Texas at Austin campus is one of the ways companies, like Amazon, are trying to thwart package piracy. Filipa Rodrigues for Marketplace
The Season

A new Amazon hub on the University of Texas at Austin campus is one of the ways companies, like Amazon, are trying to thwart package piracy. Filipa Rodrigues for Marketplace
Listen Now

At a strip mall in south Austin, Texas, on a recent weekday, UPS store owner Jay Soucia was taping up cardboard boxes as customers filtered in to send and pickup packages. Soucia runs seven UPS stores in Austin. He started out as a store clerk in the late 1990s and said back then, people who had packages sent to UPS stores were seeking a little privacy.

“They wanted to come here and not have people know their addresses or set up an address specifically for their business,” he said. “And now it is, ‘I need a safe place to send my packages.’”

People need a safe place for packages because so many are getting stuff stolen. As online commerce continues to grow, so too does the problem of package theft from our homes. Twenty-six million Americans had holiday packages stolen from their front porches or doorsteps in 2017, two million more than in 2015, according to Insurance Quotes. In a separate study, security camera company Ring found that the average value of packages stolen that same year was $140.

And because it’s getting to be high season for online holiday shopping, you or your neighbors stand a decent chance of falling victim to these porch pirates.

One place this is playing out is Austin, where legislators recently passed a new law to stiffen penalties on package thievery. Soucia said porch pirates have changed the way he markets his stores. “We remind people that hey, we can receive that package here,” he said.

Soucia is opening two more UPS stores in the next few months. He said it’s too bad, but the threat of package theft is one reason his business is growing.

Austin resident Spike Jones had his porch plundered a few years ago.  “It was my birthday and I got a message from one of my friends saying ‘did you get that package I sent? And I said ‘No, I never got it.’”

It was a bottle of gin. Jones said because it was the first time it had happened he didn’t report it to the police.

“And then I came home two days later and there’s another package was delivered for my birthday, but it was open and there was a pocket square and a tie that were laying out there on the porch. Apparently the thieves did not want that.”

Jones installed a motion sensor camera at his house, and like lots of us, started having his packages delivered to his job.

Delivery companies are trying to find other ways to thwart porch piracy.

“More people are ordering online and those those shipments have to go somewhere,” said Bonny Harrison, spokesperson for FedEx. “And quite often it’s to people’s front porches, where they could be left for a matter of hours in some cases even days. And we know the risk associated with that.”

There’s a limit to what delivery companies can do, of course. After they drop off a present you sent to grandma, their job is basically done. Some companies are giving customers more options — and trying to outwit the thieves.

“So for example, you can write instructions for your courier or your driver and ask that he or she place the package somewhere in particular,” Harrison said.

Amazon drivers sometimes try to make it a little harder for thieves by, say, wedging a package between a couple of trash cans. Then they send a picture to the person who placed the order.

A few years ago Allen Banks had an idea to save people from the porch pirates. And he could do something about it — he’s the chief of police in Round Rock, an Austin suburb.

“I said, ‘What better way than to have them delivered to our police department, let us safe keep them, let them come pick them up, when they’re available to come and pick them up?’ And that way it eliminates that potential to be a victim.”

In 2017, its first year, the Round Rock holiday shopping season program saw 30 packages delivered to the station. Last year it was 380. Banks expects more this year. He’s even allocated a second room for storing those holiday deliveries.