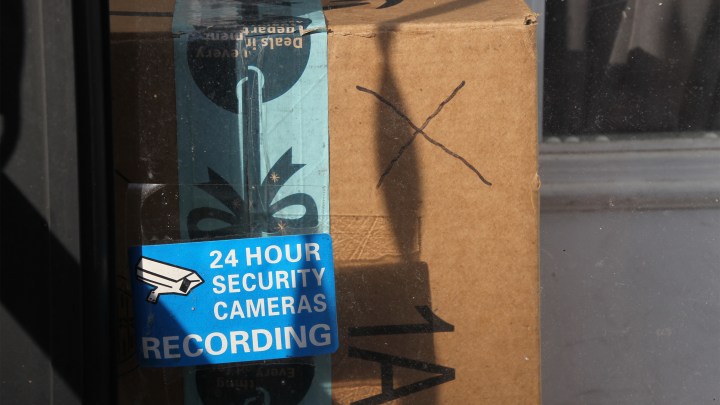 COPY
How to protect your packages from porch pirates? Get them delivered to your office. Sébastien Duval/AFP via Getty Images
Workplace Culture

How to protect your packages from porch pirates? Get them delivered to your office. Sébastien Duval/AFP via Getty Images
Listen Now

With more of our holiday shopping moving online, that means more package deliveries and thus more chances for those packages to get lost. With research showing about 15% of deliveries don’t make it to the recipient on the first try due to theft and wrong addresses, many workers have found a simple solution to that problem: getting packages delivered to their place of work, where they’re present all day and often have a receptionist or mail room to safeguard boxes.

That’s what sales manager Erin Westover has been doing this year, getting multiple personal purchases delivered to her work at a Salt Lake City, Utah, hotel.

“I’ve gotten a bunch of gifts and I’ve also just been trying to furnish my house and get everything I need for my house,” she said. “I got my boyfriend an 88-key keyboard for Christmas, so that just got delivered.”

Westover has had packages stolen off her porch at home before, and she doesn’t want her boyfriend discovering the 5-foot long keyboard box around the house.

“I don’t want him to see the size or get any inkling of what it could be so I still have it in my office,” she said.

Getting personal packages delivered to work can be problematic, though said business consultant and author Alexandra Levit.

“You’ve got to mind how things look, the perception,” she said, noting one or two packages every once in a while aren’t a big deal. Presents for the entire family, though, might raise eyebrows and questions about how you’re spending your time and company resources in the mail room.

Meredith McCarthy is on the receiving end of all those deliveries. She’s the facilities manager for a tech company in Waltham, Massachusetts with about 500 employees, where she says personal packages were getting out of hand.

“Things like Amazon, Rent the Runway, Stitch Fix, food delivery — it was becoming too much around the holiday season,” she said.

The company has a small mail room — just 100 square feet to fit all those boxes. “Once that room gets filled then we start putting them in our reception area and then into our kitchen area, which is not ideal,” said McCarthy.

So they banned them, sending out an annual email asking employees not to get packages delivered to the office between Thanksgiving and the new year.

It’s a common policy at public institutions like state universities, where taxpayer dollars are used to sort and deliver mail. Package bans are also popping up in the private sector from law offices to pharmaceutical companies.

While employers might not be happy about it, getting packages delivered to businesses rather than homes has its upside said Adie Tomer, a fellow in the Metropolitan Policy Program at the Brookings Institution.

“Whether you’re in the suburbs or the city, jobs are much denser than where people live,” he said. “So you’re reducing the amount of stops for the truck.”

That’s better for the driver, better for traffic and better for the environment. Of course, it’s probably not better for the bottom lines of the businesses that have to devote resources to deal with employees’ latest Amazon haul, but Tomer said companies could spin that to their advantage.

“You could see this being a real benefit, like ‘Hey no problem, you can get your packages delivered here,’ as a new kind of boutique benefit,” he said.