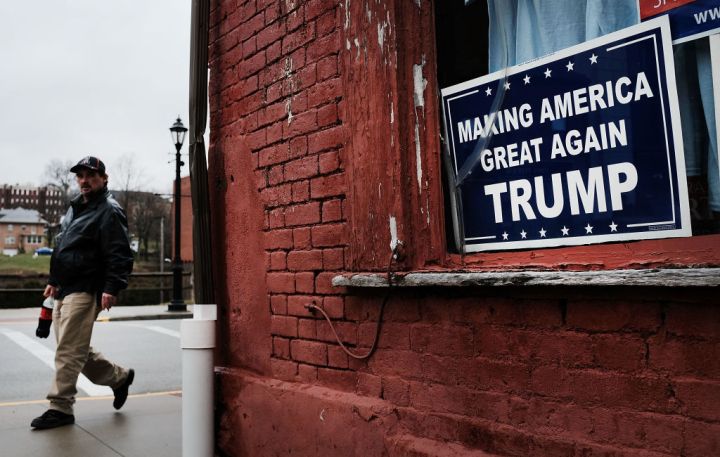 COPY
A Donald Trump sign hangs in the window in the town of Waynesburg, Pennsylvania, near the West Virginia border in 2018. Spencer Platt/Getty Images

A Donald Trump sign hangs in the window in the town of Waynesburg, Pennsylvania, near the West Virginia border in 2018. Spencer Platt/Getty Images
Listen Now

For families who’ve lived in coal country for generations, it feels like the American dream is broken, but a wave of black and Latino newcomers to the region see coal country as the second chance they couldn’t find anywhere else. In her book, “We’re Still Here: Pain and Politics in the Heart of America,” Jennifer Silva, an assistant professor at Indiana University Bloomington, interviews dozens of people living in a Pennsylvania coal town about their lives, fortunes and politics. The following is an excerpt from Silva’s book.

Warning: The following excerpt contains graphic depictions of domestic violence and expletives. In order to protect the identity of the people interviewed, the names of people and places have been altered.

In early summer 2016, I met Bree Lopez, a white woman in her mid-thirties. We sat and talked in what was once called the parlor, in a narrow, dimly lit row home, with the windows shut tight and the shades drawn. Bree’s grandfather was a coal miner who died of black lung at age fifty. Her mother, a waitress, died of lung cancer at fifty- three, and her father has never been part of her life. In Coal Brook, the jobs that pay almost enough to support a family are seen as “men’s jobs”— truck driving, warehouse jobs, construction; working in the numerous federal, state, and county prisons; or driving three hours away to drill on the natural gas pipeline. Graduating high school with poor grades, Bree already knew that “there was nothing here” for her. After a few brief stints in different cities along the East Coast, she returned to the coal region and has been waitressing, on her feet for ten hours a day, ever since.

Bree has been married and divorced twice. Her son’s father pays no child support. Her daughter’s father, an under-the-table truck driver addicted to Percocet, has contributed just “sixty-five dollars and two packs of meat since last November.” When Bree’s electricity was shut off last year, she and the kids slept on her cousin’s pullout couch for three weeks while she saved up enough money to have the heat turned back on. Bree was devastated when she could not fulfill her daughter’s sole request, for “real fishes,” for Christmas. “I’m riding the crazy train right now,” she confesses. “I’m tired from work. I’m trying to do the right thing, but also what’s in the best interest for my kids and for myself, and where we’re at right now, I can’t move.”

“You don’t matter in this town unless you have money,” Bree asserts. “You can’t be poor, no matter what color you are.” Bree teaches dance lessons for children on her day off, waiving the three-dollar fee for the poorest kids in town. When I ask her if the government should do more to help poor people, she exclaims: “Hell, yes! We should tax the shit out of rich people.” She says angrily: “There’s nothing left for our kids. I mean, they took away French from our kids. They tried to cut back on the music program, the arts program. They used to have a skate bus that ran from the old police station back on Friday nights. There’s nothing for these children.” Bree denounces extreme economic inequality and the lack of opportunities for upward mobility in American society: “You don’t just keep them [poor people] under your boot and leave them down there and throw them scraps. Lift them up. Teach them things. Educate them. Get them to work, something. You’re killing me. It’s like the rich stay where they’re at, and the middle class struggle like crazy, living paycheck to paycheck, and the poor people are just fricking poor living off the system.”

Bree also suspects that low-income parents seek out diagnoses like ADD (attention deficit disorder) for their children for the money but to the detriment of the children themselves. “It’s horrible. Children are supposed to be hyper. Discipline them. Stop medicating these kids,” she implores. She recounts the story of a mother who removed half the Adderall from her child’s pill capsules, rolling it up in a dollar bill to sell for cash. When Bree confronted this mother, she “cried a little bit, said, ‘I need to make some money.’ You can obviously tell that this mother was an addict.” What makes Bree angry is not that people are poor, unable to pay their bills, or in need of government aid, but that they seem to have capitulated to their suffering rather than fighting back against it. “It’s a depressed area, and they just make it more depressed, by doing shit like they’re doing,” she says disappointedly.

In Coal Brook’s surrounding valley, the county coroner has reported an increase in lives lost to drug overdose over the last few years. The postmortem toxicology screenings reveal a deadly mix of heroin, oxycodone, and Fentanyl. It is an open secret in Coal Brook that a prescription for Percocet costs just fifty dollars in cash — and if the doctor, whom Bree calls “the biggest drug dealer in the county,” knows your family, you can simply call in your request over the phone. Bree herself lives in constant pain. She points to various spots on her body, physically mapping out her memories of trauma and violence:

“My first husband did this to my teeth [she points to two gaps in her mouth where there should be canine teeth]. He bent me over the baby’s crib with her in it backwards. I literally was in half, so I deal with that. I don’t go to the doctor for it. They want to send me to this specialist, that specialist, a psychiatrist to deal with the pain, living with pain. I don’t even go. I just don’t even go, because, honestly, pain medication doesn’t really help me. There’s really no point, and I can’t be all fucked up walking around work, all high on whatever. I need to be where I’m at always. I can’t sit up. I have to take twenty minutes to roll onto my side to put a foot on the floor to stand up. It’s real bad. It gets real, real bad, and now that I’m waitressing, I’m on my feet twelve hours, ten hours a day, all the time. Emotionally, I’m a mess. I’m a mess. My God, my poor kids.”

This story touches upon domestic violence. If you or someone you know has experienced domestic violence, call the National Domestic Violence Hotline at 1-800-799-7233. For help outside the U.S., you can find resources at Pathways to Safety International.

When coal miners can’t breathe, getting compensation is an uphill legal battle