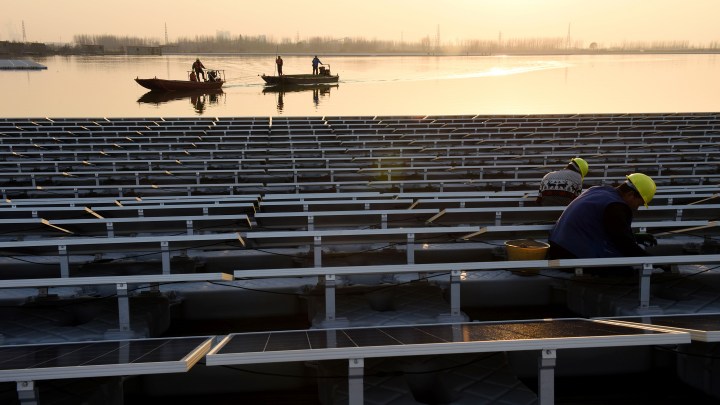 China has been the world’s biggest carbon emitter for a while, even greater than the U.S. and European countries combined.

Chinese citizens shouldn’t bear all the blame, according to Zhang Jihong, deputy director of the climate change and energy economics study center at Wuhan University.

“Foreign countries outsourced their polluted industries to China, a developing country,” he said. “We in China were willing to do it because we wanted to lead better lives.”

Being the factory of the world has propelled China’s economy to second place, behind the United States. However, tens of millions of Chinese citizens are now saying no to toxic air and water. There is a greater awareness to improve the overall environment, and Chinese President Xi Jinping’s announcement this week to “diligently seek” to be carbon neutral by 2060 is an extension of that public pressure.

“China frequently sets very radical goals, and we always do our best to accomplish them,” Zhang said. “Maybe we don’t reach 100%, but at least 90% is feasible.”

No further details have been provided on how to achieve the government’s ambitious goal, although Zhang said planting more trees and reducing coal usage is likely part of the key strategies. A main source of carbon emission is burning coal to generate electricity and power factories and homes.

“Coal contributes 60% of China’s energy production. It is a big problem,” Zhang said.

For a while, China reduced its consumption of coal, but since Chinese economic growth slowed down in recent years, coal production has been ticking up from 2017 and currently hovers close to 4 metric tons a year.

Skeptics of China’s commitment to the climate have also pointed out that the Chinese government has approved more licenses for coal-powered plants.

Zhang said China needs more energy to help develop the central and western parts of the country, but he doesn’t see this as a complete move away from its commitment to climate.

“There were many low-efficiency, small coal-power plants, and we closed them. What kind of coal-powered plants did we approve? Big ones with the most advanced technologies,” Zhang said.

China may be the biggest carbon emitter, but it is also the biggest investor in green energy.

“It’s the largest installer of wind and solar, the largest manufacturer of electric vehicles. Those are some of the really important tools that we need to decarbonize our economies,” said Alvin Lin, China climate and energy policy director with the nonprofit group Natural Resources Defense Council.

However, he said the transition to these renewable sources of energy needs to double or triple at the current pace for China to reach carbon neutrality by 2060.

It’ll be tough, he said, but he is optimistic since the Chinese government’s heavy push toward green energy has made it a viable employer in the economy.

At the same time, the cost of wind and solar-powered energy is becoming cheaper relative to coal-generated power.

Solar power is now cheap enough that a shoe factory in southern China has been looking to switch from coal power even before Xi’s announcement.

“It’s not because the government is making us,” Changjian shoe factory boss Tony Tung said. “Some of our overseas customers are demanding for us to go greener.”

Activists say Chinese businesses and consumers have to make some tough changes to achieve carbon neutrality by 2060, but Lin said the task is likely easier than in the U.S.

“[China is] different from the United States, where there is a lot of debate about whether climate change is real,” Lin said.