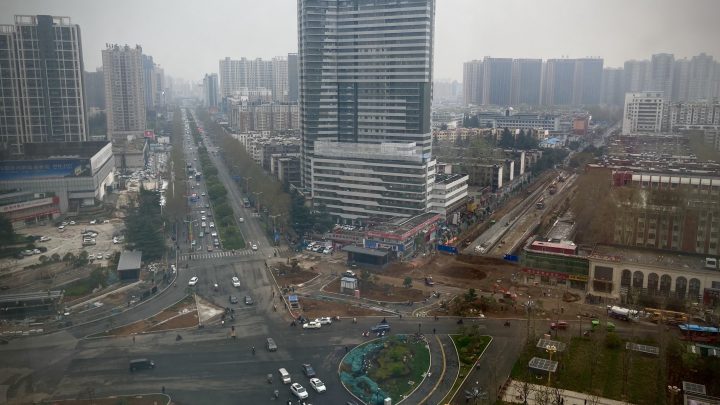 COPY
The rapid construction in Luoyang city and other urban centers across China is partly the reason the country is the world's biggest carbon emitter. Jennifer Pak/Marketplace

The rapid construction in Luoyang city and other urban centers across China is partly the reason the country is the world's biggest carbon emitter. Jennifer Pak/Marketplace
Listen Now

The city of Luoyang in central China’s Henan province is an ancient capital, a cultural center and a major industrial hub. A thin sheet of smog hung over the skyline on the day I landed. It cleared up a couple of hours later, revealing a soft blue sky. Elderly men were fishing on a canal lined with willow trees.

“The government has controlled air pollution well,” said 66-year-old retiree Li Cheng. “In the past, there were lots of smoggy days. Now there are more days with blue skies.”

He credits this to good government policy of moving factories and controlling emissions from cars. Now, China’s government is pushing further to peak the country’s carbon emissions by 2030 and go carbon neutral by 2060 — a decade later than targets set by the United States and European Union.

Ahead of the key climate talks in Glasgow, Scotland, taking place this week, China ramped up its coal use to deal with a power shortage. Some climate experts seemed disappointed with the Chinese government’s plan recently submitted to the United Nations, which gives more details on carbon emission targets within the previously announced time frame.

However, Wang Jun, who has worked in carbon emissions-related industries for the past 14 years in China and writes extensively on the topic, believes China can become carbon neutral ahead of schedule.

“It is highly possible that China can achieve [carbon neutrality] between 2026 and 2028, because China likes to finish a job ahead the schedule,” he said.

The changes needed to reduce carbon emissions are trickling down to businesses and workers.

China is the world’s biggest carbon emitter, emitting more than the U.S., the EU and India combined. The reason? It’s the world’s factory. A lot of items Americans use, such as water bottles, cellphones and car parts, are made in China. At the same time, the country is still developing. Office towers, high rises and wide roads continue to replace farm fields across China. All of that construction requires energy, too.

Last year, 60.8% of the electricity in the country was generated by coal, according to the China Electricity Council. That is down from 67.9% in 2015. Moving away from coal requires massive changes.

“We must adjust the industrial structure [and] try to reduce the size of high-energy consumption industries, such as copper and aluminum,” said Lin Boqiang, dean of the China Institute for Energy Policies Studies at Xiamen University. “They consume a lot of power but don’t contribute much to the [gross domestic product].”

By 2025, the Chinese government plans to have one out of every five cars sold be battery-electric, hydrogen fuel cell or plug-in hybrid. Luoyang’s city government has announced that all 4,200 taxis will need to be electric cars by the end of the year.

There are government subsidies for taxi drivers to make the switch, but one taxi driver told Marketplace that investing in an electric car would still be a lot of money for her. She does not agree with the new policy and declined to give her name for fear of government harassment.

“Electric cars are not suitable to be taxis. We have day and night shifts. There isn’t enough time or stations to charge the battery between shifts,” she said. The cab driver also has concerns about the mileage she can get with an electric car.

“Some drivers said the electric car shows the battery can run for 190 miles, but in the wintertime it can only run 120 miles. If you turn on the heater, you get even less mileage from the electric car battery,” she said.

The cab driver said she will hang on to her gasoline-powered car a while longer.

Climate experts warn, however, that China’s timeline for carbon neutrality could lead to disastrous consequences, some of which the country is already feeling.

In July, a year’s worth of rain dropped within days on Zhengzhou city, which is a two-hour drive east of Luoyang. In one video, waters washed an adult and a child down the street, passing submerged cars and flooded shops. Below ground, waters trapped more than 500 passengers inside subway cars, killing a dozen.

Weather is expected to get more extreme as the Earth gets warmer because of carbon emissions.

At the same time, China will speed up its use of wind and solar power, which currently account for 15% of total electricity generation, according to Wang.

Going carbon neutral has created opportunities for those, like Wang, who have carbon emissions management expertise. He said he has been contacted regularly by headhunters and companies.

Currently, he works with a manufacturer in China’s southwestern province of Sichuan that produces polysilicon, an ingredient used for solar panels.

“Most companies have zero experience managing carbon emissions. My job in this group is to get an overview of the carbon emission situation, which equipment have carbon emissions, what kind of greenhouse gases are emitted,” Wang said. “It’s basic but fundamental work.”

It is also difficult work now that China’s factories are working overtime to fulfill demand generated during the pandemic. Electricity use has shot up, and there here have been power cuts in over 20 provinces. The power supply has stabilized somewhat because, once again, China has boosted coal use.

The situation is temporary, according to Lin, the professor from Xiamen University.

“If China’s government says it’ll be carbon neutral by 2060, it will do it because this is a government with continual governance. It is different from the U.S., which can change its leadership every four years,” Lin said.

He said China is remarkable making this much progress, given that the country’s per capita GDP is one-sixth of that in the U.S.