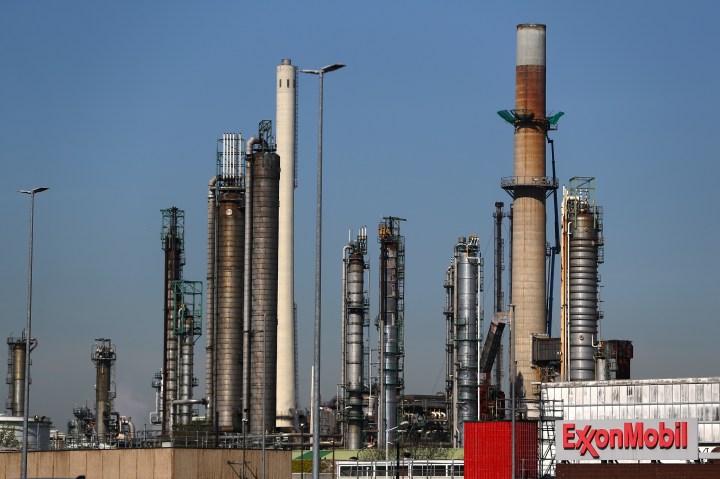 An ExxonMobil refinery in Rotterdam, the Netherlands. Many companies have publicly committed themselves to reducing carbon emissions, but some experts question whether their methods will be effective. Dean Mouhtaropoulos/Getty Images

An ExxonMobil refinery in Rotterdam, the Netherlands. Many companies have publicly committed themselves to reducing carbon emissions, but some experts question whether their methods will be effective. Dean Mouhtaropoulos/Getty Images

In the past year, we’ve seen the devastating effects of extreme weather caused by climate change. Texans struggled to stay warm this winter as temperatures plunged to record lows, disabling much of the state’s power grid, while residents in the Pacific Northwest sweltered under summer heat waves that hit record highs.

The U.N.’s Intergovernmental Panel on Climate Change published a report this week confirming that human activity is the cause of our climate crisis. Global warming is likely to increase atmospheric temperatures about 1.5 degrees Celsius above preindustrial levels within the next 20 years. A previous IPCC report found that the world will have to achieve net-zero carbon emissions by 2050 to prevent temperatures from rising beyond that.

As people become more attuned to the crisis, corporations are facing more demands for  accountability. Only 100 companies have been responsible for about 71% of the world’s carbon emissions since 1988, according to a 2017 report from the Carbon Majors Project. Among those  companies are oil and gas giants Aramco, ExxonMobil, Royal Dutch Shell, BP and Chevron, although emissions are also generated by burning coal, producing cement and from other sources.

“They have a moral responsibility, in my mind, to help address the climate problem they helped create by overreliance on fossil fuels and overinvestment in production and exploration,” said Richard Heede, director of the Climate Accountability Institute, which produced the report.

In recent months, some major U.S. corporations have discussed the idea of cutting their carbon emissions without making any clear or firm commitments.

Back in May, Chevron shareholders voted in favor of a proposal to slash emissions, although it did not mandate how much to cut them or by what date. At Exxon, leaders are considering a plan to cut net carbon emissions to zero by 2050.

Outside the country, legal pressure has forced oil and gas companies to make decisive changes. In May, a Dutch court ruled that Shell must reduce its carbon emissions 45% by 2030.

Going net-zero has gained momentum in recent years, with some large companies committing to initiatives like the Climate Pledge, which was created by Amazon and Global Optimism. The pledge calls for achieving net-zero annual carbon emissions by 2040 and includes JetBlue, Microsoft, Visa and Uber as signatories.

Individual states, such as California, Washington and New York, as well as universities, have also set net-zero goals.

An organization has achieved carbon neutrality when it emits the same amount of carbon dioxide that it offsets through other means, CNET explained. The output of carbon essentially would have “a net neutral impact on the environment.”

However, Aaron Strong, an assistant professor of environmental studies at Hamilton College, said it’s a mistake to see net-zero carbon emissions as the end goal.

“It’s a milestone, or should be a milestone, on the pathway to decarbonization,” Strong said. “And to the extent that pursuing net zero or carbon neutrality as an end goal locks us into systems based on fossil fuels for longer, there’s a chance that these pledges could actually be an impediment to the transition away from fossil fuels.”

In theory, Strong said, net zero would be great if you’re able to offset an equivalent quantity of emissions by, for example, planting trees or managing forests, as many companies do in their drive toward carbon neutrality.

But he said many forest management projects aren’t pulling additional carbon out of the atmosphere. Trees may not actually end up growing, possibly being destroyed by forest fires.

“There’s very little stringent accountability or oversight for whether their offset projects are … truly reducing the amount of carbon they say that they are,” Strong noted.

He thinks a corporation shows “real climate leadership” when it decarbonizes its own operations, for instance, converting to electric transportation systems and moving toward full-scale renewable energy.

Heede has also questioned these offsetting methods. That’s why, he said, he would like to see companies focus more on managing their direct carbon emissions for all “scopes,” which is how greenhouse gas emissions are categorized.

“Corporations do a variable job on quantifying their emissions. Many ignore Scope 3 emissions, which can be a substantial portion,” Heede said. “If you’re only including Scope 1 and Scope 2, it’s an easier task, because those are emissions attributable to your own facilities.”

Although it’s routinely disclosed its Scope 1 and Scope 2 emissions, Exxon only began providing data on its Scope 3 emissions this year.

Heede said companies are shipping products across the globe and, in the process, releasing emissions that would fall under Scope 3.

“We need to focus on the elephant in the room, and that is the products they sell,” Heede said. “We need to invest more in renewable forms of fuels and electricity.”

He noted that calculating emissions inventories on the same quantifiable basis, or using similar definitions of what to include, would help in comparing the performance of different companies.

“Every consumer in society, whether it would be a large corporation or an individual or a group or a nonprofit organization or an airline, all have shared responsibilities to reduce their emissions,” Heede said. “The opportunities to do so cost-effectively are much larger in a large organization like a corporation.”