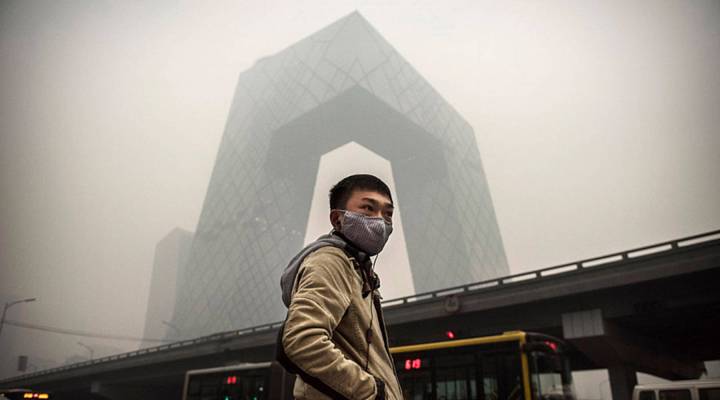 COPY
A Chinese man wears a mask as he waits to cross the road near the CCTV building during heavy smog on November 29, 2014 in Beijing, China.  Kevin Frayer/Getty Images

A Chinese man wears a mask as he waits to cross the road near the CCTV building during heavy smog on November 29, 2014 in Beijing, China.  Kevin Frayer/Getty Images
Listen Now

What’s the benefit of cleaner air? An extra two years of life for the average person in the world, a new study finds.

The study, from researchers at the University of Chicago’s Energy Policy Institute, introduces a new way to think about tiny air pollution particles: how dirty air, created mostly by burning fossil fuels, directly causes shorter lives. In India, average life expectancy is 4.3 years lower than it could be if the country air met standards set by the World Health Organization. In China, the average life is cut short 2.9 years; in the United States 0.1 years, according to the study.

“There’s not many good things about death, but we can all agree we don’t want it to happen,” said lead author Michael Greenstone, director of the energy institute and economics professor.  Measuring the effect on life expectancy “seemed like the perfect way to measure the impacts of air pollution,” he said.

When it comes to life expectancy, the study finds air pollution “is the greatest threat to human life in the planet,” Greenstone said. “It has a larger impact than AIDS and even cigarette smoking. And war and terrorism.”

Courtesy of the Energy Policy Institute at the University of Chicago

In the United States, the study finds life expectancy has improved dramatically since the 1970 Clean Air Act was signed by President Richard Nixon. Between 1970 and 2016, life expectancy increased by 1.5 years, as air pollution declined 62 percent.

Even though the average American enjoys much cleaner air, certain urban area still trail behind the rest of the country, according to the paper’s new Air Quality Life Index.

For example, if Fresno in central California were to meet WHO standards, its residents would live an extra year. Los Angeles residents would extend their lives by about half a year. Indiana, Illinois, Ohio and Arizona residents have average life expectancies shortened by 3.5 months, the study finds.

At issue are hazardous, microscopic particles of soot, smoke and dust most often created by the burning of fossil fuels. The tiniest, known as PM2.5 particles, are a mere 3 percent of the diameter of a human hair and happen to be the most deadly. When inhaled, PM2.5 particles shoot into a person’s respiratory tract, then the lung’s tiny air sacs known as alveoli, and eventually the bloodstream. This dynamic increases the risk of stroke and heart attack, the study says.

PM2.5 particles are created most often by burning coal in power plants and burning petroleum in vehicles. Because of their minuscule size, the particles travel “hundreds or thousands of kilometers” in the air, the paper states.

“This is an incredibly valuable tool that should be used by policymakers across the world,” said Jeffrey Holmstead, a former EPA air regulator under President George W. Bush, now a lobbyist with Bracewell LLP representing utility and mining interests. “There is no question that fine particle pollution is the most serious health threat facing billions of people today, particularly in Asia.”

“Our energy future cannot look like the past,” Ernest Moniz, former energy secretary under President Obama, said. “The AQLI clearly demonstrates that particulate pollution, driven largely by the burning of fossil fuels, is the world’s leading threat to life expectancy.”

Correction (Nov. 28, 2018): An earlier audio version of this story misstated the name of Indiana University. The audio has been corrected.