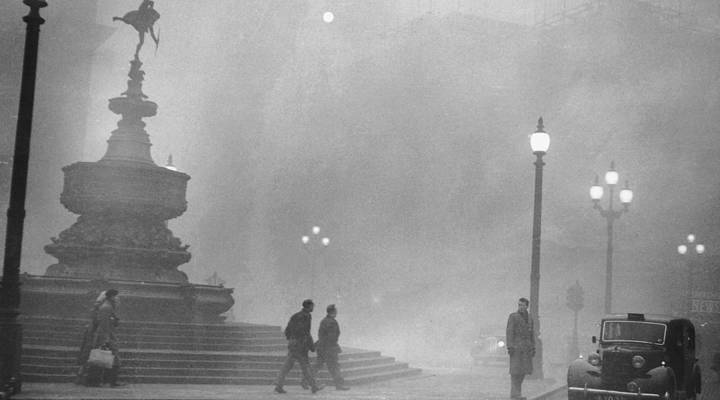 A new study on the worst pollution event in recorded history, what’s known as the London Smog, finds a staggering link between pollution and asthma. On Friday, December 5, 1952, a suffocating cloud hung over London. The wind died, and an odd temperature pattern known as an “inversion” trapped the chimney smoke and smokestack junk in place. It lasted five days.

Four thousand people died, though blurry-eyed Londoners didn’t even know until undertakers started to run out of coffins. Now, some longer-term effects are in, as far as asthma.

“We look at kids at many different ages at the time of the event,” said University of California-San Diego economist Prashant Bharadwaj, lead author of the study in the American Thoracic Society’s American Journal of Respiratory and Critical Care Medicine. “And what we find is the largest effects in terms of exposure to the smog is if the kids who are exposed are particularly young. And by young, I mean less than one year of age or even in utero.”

In the study, the youngest Londoners turned out to be five times more likely to have asthma. Nearly 25 percent of those in London during the Great Smog reported having asthma; those not in the city at the time reported a 5 percent rate.

There is a lifelong cost to asthma. One estimate for the total cost to the United States comes out to more than $3,200 for every American, per year.

Which may be conservative. Environmental economist Sylvia Brandt at the University of Massachusetts has found that children with asthma have mothers who quit the workforce 18 percent of the time.

“They miss out not only on the days that they would miss during the asthma exacerbations, but they actually miss out on a career of earnings,” Brandt said. “And that changes their future wages that they could earn. It also changes how much they can save for retirement.”

That’s just a numeric way to tally the cost. One study of air pollution in general is that it claims 6.5 million lives around the world every year; that’s more than HIV and malaria combined. Air pollution also has been shown to shorten lives in Chinese and Indian cities, by at least 3.5 years.

“I believe air pollution is likely the greatest risk to human health out there today,” said energy economist Michael Greenstone of the University of Chicago, author of the China-India studies, “more so than war, more so than malaria, more so than all the things we generally focus on.”