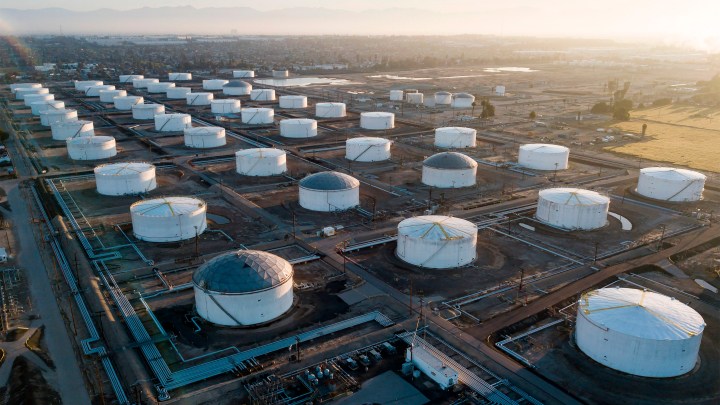 COPY
Oil storage tanks in Carson, California. The use of fossil fuels dropped during the lockdown, and supplies piled up. Robyn Beck/AFP via Getty Images
COVID-19

Oil storage tanks in Carson, California. The use of fossil fuels dropped during the lockdown, and supplies piled up. Robyn Beck/AFP via Getty Images
Listen Now

The CEO of Shell said in a new interview that “we have a core role to play in the energy transition” away from oil. BP’s chief executive reportedly told workers the pandemic has “accelerated and amplified” a company reorganization plan to lower carbon emissions. During an interview with IHS Markit as part of the consultancy’s CERAweek Conversations series, ConocoPhillips’ chairman and CEO said, “I would probably if I was a betting man today say it would be pretty difficult for [the United States] to return to 13 million barrels a day.”

Is COVID-19 a turning point for the oil and gas industry? Executives and analysts are watching several key factors that could accelerate change in the fossil fuel business.

First: global demand. So many people around the world have been forced to learn to work and play without driving or flying. “It’s hard to imagine how the aviation industry ever goes back to the rate of growth we have seen in the last two decades,” said Mark Lewis, head of sustainability research at BNP Paribas Asset Management.

The pandemic lockdown has shown “blue skies and clean air” in places like China and India, Lewis said. “This will leave a big impact on the psyche of citizens in the developing world and [put] extra pressure on policymakers.”

Another factor amplified by the pandemic: deglobalization. Countries have pursued vaccine research on their own, imposed export controls on face masks and ventilators and imposed travel bans. Companies in the medical space have pledged to make supply chains more regional.

“I think we’re seeing the broader forces of deglobalization, which is also accelerated by the COVID-19 crisis,” said Mark Finley, a fellow in energy studies at Rice University and a former senior economist at BP.

The oil industry is also under pressure from investors, given that fossil fuels have been the stock market’s worst-performing sector for years. Lewis said renewable energy stocks fetch double the price of oil shares.

“And if investors are telling you that they want to see more renewables investments rather than oil investments, you know the writing is on the wall,” he added.

Even before the pandemic, many major oil companies were moving to provide more environmentally friendly types of energy, including natural gas and wind. Whether the pandemic has sped up change is hard to know, Finley noted.

“For everyone in New York or San Francisco who wants to sit at home and work from home,” he said, “there’s somebody in the emerging world who aspires to own a car.”