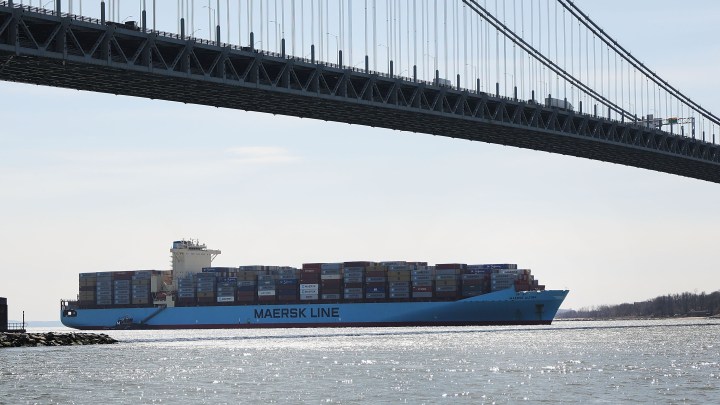 COPY
In a step toward creating a carbon-neutral shipping fleet, Maersk will purchase eight vessels that run on green methanol. Spencer Platt via Getty Images

In a step toward creating a carbon-neutral shipping fleet, Maersk will purchase eight vessels that run on green methanol. Spencer Platt via Getty Images
Listen Now

The Danish company Maersk — the world’s largest container-shipping firm — said Tuesday that it has ordered eight vessels that will run on green methanol, a carbon-neutral fuel.

The company said the ships will be 10% to 15% more expensive than their typical vessels and will each cost about $175 million. But, it also called this an important step in developing a carbon-neutral fleet by 2030, which is something stockholders and consumers are demanding more and more.

Currently, container ships burn what’s called bunker oil to get where they need to go.

“And, of course, when you burn bunker oil you make sulfur oxides, nitrogen oxides and also particulate matter,” said Surya Prakash, a chemistry professor at the University of Southern California. “With methanol, it can be very green because methanol is a very good transportation fuel, the emissions are clean. It does not make any sulfur oxides. It does not even make nitrogen oxides.”

But one key to Maersk’s mission of becoming carbon-neutral is making sure that the methanol used is itself green, Prakash said. China makes a lot of methanol from coal.

Green methanol can be produced, for instance, directly from biomass, which is waste and other organic material used for fuel. But that’s half the equation, according to Jeffrey Rissman at Energy Innovation, a nongovernmental organization.

“You need both the fuel production — you need to be able to produce zero-carbon methanol — and then you need to have the ships equipped to burn it,” he said.

Maersk said the vessels will be produced by South Korea’s Hyundai Heavy Industries, and they’ll be able to run on both methanol and normal bunker oil — sort of a hybrid ship. The company said a major push in the move to zero carbon came from the firms they do business with. That makes sense, said Dan Sperling, an environmental engineering professor at the University of California at Davis.

“Walmart, Amazon, you know, all these companies that are consumer facing, they’re getting a lot of pressure on them from both stockholders as well as consumers to reduce their carbon footprint. And so they’re putting the pressure on shipping companies,” Sperling said.

The shipping industry has long taken a back seat to cars and trucks in the blame game over air quality, Sperling said.

“In places like Los Angeles, a big part of the pollution is now coming from the ships that are sitting there in the harbor,” he said.

This is a good thing for local air pollution and for public health in general in cities near ports, Sperling said.

Maersk is sending a container ship through the Arctic. Here’s why.