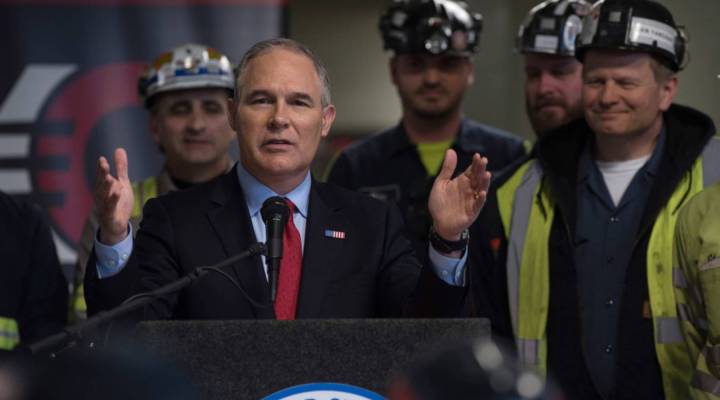 Coal keeps coming up as the new administration talks about creating more jobs. Back in March when President Trump signed an executive order to rollback climate change efforts, he gestured to the group of coal industry workers surrounding him and said, “You know what this says? You’re going back to work.” And just a few days after, Trump pulled out of the Paris climate accord. Environmental Protection Agency Administrator Scott Pruitt defended that decision by trumpeting the number of coal jobs created recently. But there seems to be some confusion about how many coal jobs there are and how many there aren’t. Marketplace host Molly Wood talks with Scott Tong from our Sustainability Desk to clear up the numbers. The following is an edited transcript of their conversation.

Molly Wood: All right, so EPA Administrator Scott Pruitt has been talking up all of these added coal jobs, saying that the U.S. has added 50,000 jobs in the coal sector. He later took a fair amount of heat for that statement. Is it true?

Scott Tong: Well, he took a lot of heat for it perhaps because of the magnitude of how misleading that number is.

Tong: You see, the Labor Department says we have 51,000 coal mining jobs in the country total, but not increase. Total. Now Scott Pruitt later kind of corrected himself, suggesting that he meant the broader mining sector for which coal mining is a tiny sliver. So here’s the actual number: About 1,000 coal mining jobs according to the Labor Department have been added since January. So that’s 1,000 jobs in an economy that often adds 150,000 jobs every month. I mean, we have fewer coal miners than workers at Disney World in the U.S. at this point.

Tong: Now, sometimes jobs slip up and down — this is a commodity sector that’s volatile — but the longer story is an unmistakable kind of centurylong decline in coal jobs. I went recently, Molly, to coal country in southern Illinois and western Kentucky. And every single person I spoke to in the industry there, they said, “We know we’re not getting back to where we were as far as coal jobs. We’re just trying to halt the decline.” So that’s the real picture.

Wood: So let’s talk a little bit about that decline. First of all, why have coal jobs been in decline and particularly recently?

Tong: Well, in the last five years alone, America’s coal jobs have fallen almost by half. There are a few big things going on here. We have coal being replaced by other fuels in the system. Natural gas is cheaper in much of the country, and renewable energy is desired by policies in 29 states. So that’s one big piece of it. And a much smaller piece of the story, according to a recent study, is regulation. We have clean air rules limiting pollutants like sulfur and mercury, and those go back to the first Bush administration. And I should say, hardly any of what we’re talking about has to do with carbon climate rules that haven’t even kicked in yet at the federal level. And we know this administration is trying to undo those. Now here, briefly, is the longer story, Molly: A century ago we had 800,000 coal miners. But then coal-powered steam engine trains gave way to cars and transportation, that is coal being replaced by oil, and then coal for heating got replaced by electricity. So these are big, big energy generational trends that we’re seeing here, Molly.

Tong: It’s a powerful story. I mean, many towns in the U.S. once upon a time were literally built on coal by grandparents, grandfathers who came to the States from Eastern Europe to make a life. Miners today are still heroes. They’re the strongest, bravest men in town who take on some of the most dangerous work underground in many places. So when something is lost — I mean there’s evidence from behavioral science that the pain of losing something is actually twice as strong as the pleasure of gaining something, so there’s something about what’s called the salience of loss. And we see very clearly, more broadly in the labor market, that we looked in the rearview mirror, and we know the jobs that we’re losing. Even though we’re always creating new jobs, it’s less clear what those new jobs are going to be. And that’s always the challenge.