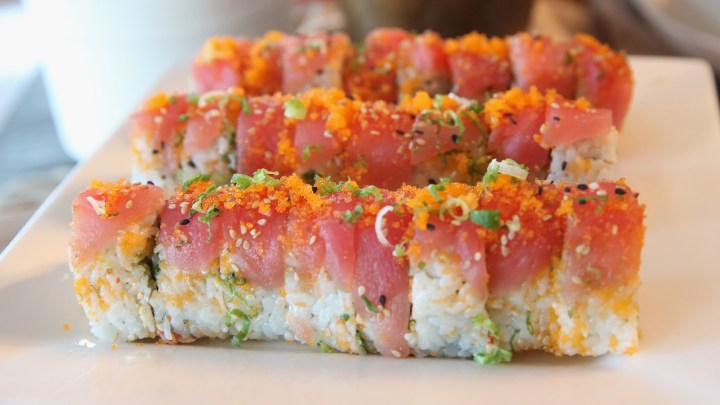 The London-based sushi chain, YO! Sushi, is planning to buy one of the largest operators of sushi kiosks in the U.S.

The Wall Street Journal reports the price is about $100 million for Houston-based SnowFox, which operates around 700 mini sushi joints, typically in grocery stores. The deal offers further evidence that the market for prepared foods in grocery stories is heating up.

Just take a trip to the Fresco Y Más supermarket in Orlando, Florida, which sells your standard grocery items. On a recent weekday, however, Shannon Velez was walking out with two big bags of hot empanadas from the prepared food section.

“I just happened to be passing here today, so I decided to come in,” she said.

“When you add on food away from home to the food-at-home business, it almost doubles the total size of the market that a grocer is playing in, so the size of prize gets gets much bigger” said Tory Gundelach, vice president of retail insights at Kantar Consulting.

Grocery stores, she added, are embracing new prepared food offerings in order to establish themselves at the forefront of food trends, and to compete for busy consumers — the kind who are ordering from delivery services like Grubhub.

Rick Stein, vice president of fresh foods at the Food Marketing Institute, expects the prepared food market to rake in money as more and more grocers become what the industry is now calling “grocerants.”

“Where they combine the grocery store with the restaurant,” Stein explained. “You even see sit-down areas and, you know, the fireplace, the ambiance — the whole bit of a restaurant.”

Take Kroger’s. The chain announced it’s planning to open a 45,000-square-foot store in downtown Cincinnati this fall. It’ll have five restaurants inside, including a BBQ joint and an Asian street food spot.